By HRAYR ATTARIAN
November 23, 2013
Sign in to view read count 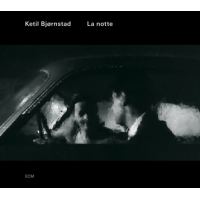 Recorded live on July 21st 2010 at the Molde International Jazz Festival, Norwegian pianist Ketil Bjørnstad's La Notte is an eight piece suite inspired by the 1961 drama of the same name by the great Italian director Michelangelo Antonioni. It is not, however, a mere Antonioni tribute, but an homage to innovative filmmakers in general and in a way to the art of cinema itself.

The album goes through many moods, from Sheppard and Lechner's alternating spirited dances that melt into a melodic and whimsical group play on the third section to the breathtaking climax of the seventh passage. The latter emerges immediately out of the intensely intimate cello/bass conversation that closes the sixth with an elegiac beauty. Andersen goes from lyrical pizzicato to fiery acrobatics leading a turbulent and spontaneous ensemble expression replete with his wordless humming. Sheppard's acerbic, free flowing lines echo Aarset's scorching sonic swells that flow freely over Mazur's energetic, angular drums.

There are also exquisitely tender moments on the record. The warm, comforting sound of Lechner's lilting bowing and Sheppard's breathy tenor over Bjørnstad's undulating shimmering phrases and Mazur's chiming, sparkling cymbals and bells evokes a harmonious domestic scene on "IV." This contrasts nicely with the almost Baroque, stately motif of the fifth segment of the opus. Lechner and Sheppard intertwine their respective extemporizations like a lovers' embrace on the ethereal, almost spiritual "VIII." Aarset's electronics enhance the otherworldly atmosphere memorably bringing the album to a close.

Much like the works of the cineastes that have inspired Bjørnstad's stimulating and captivating composition, its intellectual and emotional impact lasts long after the disc has stopped spinning.