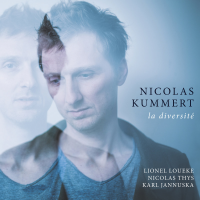 Belgian saxophonist Nicolas Kummert has been influenced by African music since a two month stay in Senegal at the age of 17, where he collaborated with musicians from that country and later from Benin, Mali, Kenya, Sao Tomé, Morocco and Tunisia. He met award-winning Blue Note guitarist Lionel Loueke during a recording session for Beninese singer Patrick Ruffino in 2008 and by 2015 Kummert had asked Loueke to join his new band. His previous album Voices (2014), featured Senegalese guitarist Hervé Sambe. Another recent recording was 2015's Flow with a quartet going by the name of Drifter, which he co-led with the Finnish pianist Alexi Tuomarila.

Whilst Kummert's carefully crafted compositions and serpentine saxophone lines are absolutely key to La Diversité it's Loueke's subtle contributions which propel it to the next level. Whilst Loueke has a proclivity for understatement in a similar vein to Bill Frisell, he is equally capable of delivering more raucous expositions such as heard on the rocky "We'll Be Alright," immediately countered by its diametrically opposite acoustic version, "And What If We're Not." Loueke seamlessly moves from electric to acoustic guitar, employing bell like harmonics on "Le Vent Se Lève" and gentle finger picking on "Le Peuple De L'Arc-En-Ciel."

As a duo, evidenced by the Eric Satie-based "Gnossienne A Deux," Kummert and Loueke recall the near-magical teamwork of Jimmy Giuffre and Jim Hall. The poignancy of two versions of Leonard Cohen's hit song "Hallelujah" (and an acoustic "Hallelujah Again") played respectively by the quartet and duo, is emphasised by the typically delicate treatment afforded the pieces. From the West African staccato feel of "Rainbow People" to the languid sultriness of "Diversity Over Purity" this album is mesmeric and innovative, replete with fresh ideas and sounds.