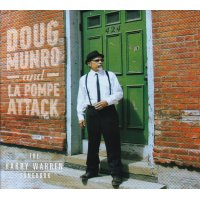 Doug Munro is the great nephew of Harry Warren who was the first major American songwriter to compose specifically for films. All the tunes on this CD are from movies with the exception of two Munro originals, "Blues For Harry" and "You Again" and barring those two and "Nagasaki," were all written in the 1930s and 1940s.

The music is played in the swinging style of The Quintet Of The Hot Club Of France, whose most famous stars, Django Reinhardt and Stephane Grappelli, were surely the greatest innovators of this genre. The recordings were organised in four sessions between June and August 2016, with notable guitarist Howard Alden present on "Serenade In Blue" and "Lullaby Of Broadway."

"Nagasaki" and "We're In The Money" include vocals copying a megaphone style of singing that do nothing to improve the songs and might well irritate. "Chatanooga Choo Choo" is fun and the ensemble arrangement of three guitars is rather effective. "The More I See You" contains some good swirling guitar soloing.

There's a nice, rather touching (albeit surprising) nod to Jimi Hendrix on "September In The Rain" where the last few bars emulate the ending of Hendrix's "The Wind Cries Mary." "You Must Have Been A Beautiful Baby" fairly cracks along and is a reminder of just how many memorable and successful songs Warren wrote. He actually composed over eight hundred! The closer is "At Last" which opens with some delicate harmonics and solo guitar. This is a pleasant session of well-loved tunes. It isn't groundbreaking, but then that wasn't the intention, rather to revere the memory of one of the most prodigious contributors to the great American songbook.

Lullaby Of Broadway; (I’ve Got A Girl In) Kalamazoo; Serenade In Blue; Nagasaki; Jeepers Peepers; I Only Have Eyes For You; Chattanooga Choo Choo; The More I See You; September In The Rain; Blues For Harry; Forty Second Street; We’re In The Money; Boulevard Of Broken Dreams; You Again; You Must Have Been A Beautiful Baby; At Last.