By EYAL HAREUVENI
November 25, 2014
Sign in to view read count 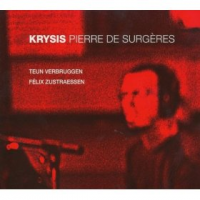 Belgian pianist Pierre de Surgères is an autodidact musician who pursued a musical career only after he studied journalism and philosophy. So far, that career has been quite erratic, he attended master classes with diverse mentors such as Toots Thielemans and Anthony Braxton, launched a project dedicated to the provocative songs of Serge Gainsbourg, worked in Florida with funky jazz masters like George Duke and Marcus Miller. Surgeres formed a quintet back home featuring acclaimed French saxophonist Alexandra Grimal that played his compositions influenced by traditional jazz and ideas from Steve Coleman's M-Base. Just recently, Surgeres founded the Krysis trio.

The 14 concise songs on their debut album are based on symmetry, rhythmic and melodic serialism or rhythmic invention, often spontaneous.

Pierre de Surgères knows how to tell a dramatic story in sound, sometimes even a story with conflicting narratives like the title piece. His compositions suggest distinct scenery, atmosphere and vibe, rich in nuance and plot shifts, further stressed with the relaxed, supportive interplay and driving pulse of the rhythm section.The trio knows how to build tension, as on the cinematic "Dimitri Had a Car Crash," then release it with humor and irony without subscribing to conventions.They also convey lyrical emotions with impressive command, as on the touching "HLM Blues."

A promising debut by a trio with an original voice of its own.