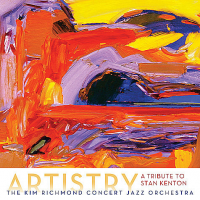 On Artistry, the Kim Richmond Concert Jazz Orchestra pays homage to one of Richmond's former employers, the legendary Stan Kenton, not by rehashing music performed by the Kenton Orchestra—no matter how forward-leaning that may have been—but rather by renovating a few themes associated with Kenton (and quite a few others that weren't) in the manner in which Stan conceivably might have approached them if he were alive today. Among the album's dozen tracks are three that are explicitly bound to Kenton: "Intermission Riff," "The Peanut Vendor," and his venerable theme song, "Artistry in Rhythm," which raises the curtain on this picturesque and ambitious studio session.

Richmond wrote three numbers—"Horizon Under," "Anchor of Hope," "Poetry"—and arranged everything, from Johnny Mandel's dreamy "Seascape" and Neal Hefti's "Virna" to the standard "Willow Weep for Me" and a trio of songs from Hollywood films: "Invitation," "Over the Rainbow" and "Zippidy Altered," Richmond's modern adaptation of the Academy Award-winning song from 1946, "Zip-a-Dee-Doo-Dah." The liner notes consist of lengthy analyses of the songs, with Richmond explaining clearly the framework and purpose of each one, starting with "Artistry in Rhythm," which embodies all the elements of the original, reinforced by Bob Carr's bassoon solo, nimble trombone passages in a Latin epicenter, yeoman work by the rhythm section, and a brief commentary by flutist Alex Budman that leads to the tune's final crescendo.

Steve Hufffsteter's trumpet, Budman's soprano and Glen Berger's tenor saxophone are the solo voices on "Horizon Under," which opens in Sauter / Finegan style (martial drums set against chirping trumpets) before settling into a gentle groove enhanced by John Proulx's wordless vocal. "Anchor of Hope," which runs for more than fifteen minutes, is the album's centerpiece, spanning a variety of moods and colors from choral to Latin, ballad to swing, and enfolding earnest solos by Berger, tombonist Joey Sellers, trumpeter Brian Swartz, bassoonist Carr and John Dickson on French horn as a preface to Ron King's wailing high- note trumpet. Tenor John Yoakum and bassist Trey Henry hold sway on "Intermission Riff," a straight-ahead chart that uses as its midsection an ensemble setting of trombonist Carl Fontana's memorable solo from a mid-'50s recording of the song.

Guest soloist Hubert Laws makes his lone appearance on "Seascape," his sensuous flute brightening Mandel's lovely ballad prior to Richmond's superb alto solo on Bronislau Kaper's haunting, dark-hued "Invitation" and buoyant statements by guitarist Tom Hynes and flutist Budman on the Harold Arlen / Yip Harburg classic, "Over the Rainbow," admirably arranged by Richmond who then gives free rein to trombonist Ryan Dragon and pianist Andy Langham (who seize the moment) on an updated version of "The Peanut Vendor." The luminous "Virna," written by Hefti to depict the actress Virna Lisa, showcases trombonist George McMullen and vibraphonist David Johnson and precedes Richmond's second solo feature, Ann Ronell's ballad "Willow Weep for Me," on which he is typically awesome.

This leads to "Zippidy Altered," wherein Richmond stands Allie Wrubel's unforgettable tune on its ear so that, in his words, "only the contour remains." While that's better than nothing—and Richmond is certainly entitled to make whatever changes suit his plan—those who love the melody as originally written (some reviewers among them) may be less than charmed by the revisions. The album closes on a more auspicious note with "Poetry," an enchanting orchestral tone poem on which Proulx's expressive vocal once again undergirds the ensemble. In sum, a remarkable tribute to one of the big-band era's musical giants, admirably scored by Richmond and splendidly performed by the exemplary Concert Jazz Orchestra, which lives up to its name in every respect.

Artistry in Rhythm; Horizon Under; Anchor of Hope; Intermission Riff; Seascape; Invitation; Over the Rainbow; The Peanut Vendor; Virna; Willow Weep for Me; Zippidy Altered; Poetry.