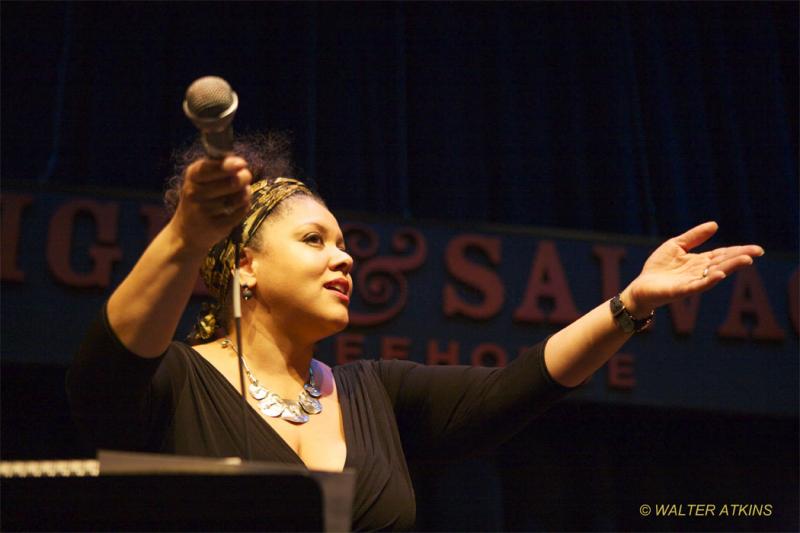 Nalley opened with Simone's U.K. top ten hit, "My Baby Just Cares for Me," to frenzied cheers from the Freight & Salvage audience. Her warm treatment of the Donaldson/Kahn jazz classic set the tone for more insightful music to come.Hideo and Sandra, devoted Nalley fans seated nearby commented, "We saw her last night in San Francisco...can't get enough."

Simone's gospel imbued blend of jazz, classical and Blues elements combined with a rich contralto, gave her songs a distinctive signature. According to Nalley, the North Carolina piano prodigy liked to call her sound, "Black folks classical music." She also talked about Simone growing up listening to her mother's 78-rpm records. A career highlight was a request to sing for the ground breaking Afro-American playwright Lorraine Hansberry, who inspired Simone's, "To Be Young Gifted and Black."

For the next track, "In the Evening by the Moonlight," by James Bland, Skaff's soaring guitar work was featured. Nalley talked about the moment a woman meets the "other woman" and goes by the wayside. The emotional Irving Berlin tune, "You Can Have Him," spoke of loss and also, a woman's pride and strength. Nalley nailed it with soulful, heartfelt conviction. Bryson's steady brushwork also bolstered the melancholy track. Huge waves of applause washed over the vocalist and her band from the entire house. During the heavy ovation, an enthralled woman made timely sounds best described as Native American war shouts whenever the music moved her. She was evidently moved many more times during the long set.

Nalley described how Simone's small hometown contributed financially to her classical piano lessons and her reaction to not being accepted by a Philadelphia music school-despite her outstanding audition. She later moved to New York and changed her name from Eunice Kathleen Waymon to Simone for playing local clubs undetected by her parents. "Nina" was a childhood friend's nickname for her and "Simone" came from the French actress Simone Signoret.

Other songs performed included the famous Afro-American playwright and lyricist Oscar Brown Jr.'s, "Forbidden Fruit," and the George Gershwin standard, "I Loves You, Porgy." Nalley assertively said, ..."no sweet n' low" for her version of the deliciously sexy "I Want A Little Sugar In My Bowl" by Bessie Smith. She also did the bluesy folk standard, "House of the Rising Sun," popularized by the Animals.

Before the intermission, a cake was brought on stage to celebrate pianist Hall's birthday and she joyfully blew out the candles. After the break and a wardrobe change, Nalley and group did more Simone selections: "Four Women," "Revolution," "See-Line Women" and "Ain't Got No... I Got Life," from the revolutionary '60s Broadway musical Hair. On stage, Nalley was very comfortable singing and moving without her shoes. Her band provided a strong foundation along with searing solos all night. Her slow burning treatment of the wildly influential, "I Put A Spell On You" by Screamin' Jay Hawkins was a familiar pleasure enjoyed by all. Simone also used the sensational Hawkins classic from 1956 for the title for her 1992 biography.

The remarkable concert closed with the powerful, "I Wish I Knew How It Would Feel To Be Free." For the encore, Nalley sang, "I Shall Be Released," embracing Hall at the piano while the two women traded verses. This exquisite set closing was met with a zestful standing ovation and more war shouts.

Kim Nalley's ambitious imagery of the exceptional Nina Simone was a living tribute to the artistry, genius and soul of this treasured American composer/musician/wife and political activist. Ms. Eunice Kathleen Waymon was smiling this night.