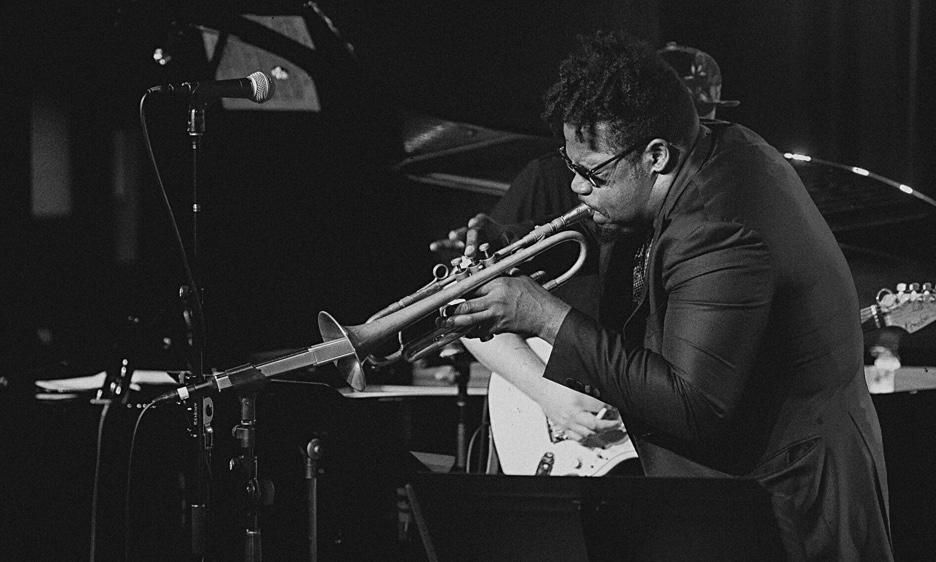 When I play I go 'wherever' the vibe takes me. Sometimes I might write something and I’m thinking about the technical chords and the inner workings of a song.
—Keyon Harrold

Keyon Harrold performed at The Blue Llama in Ann Arbor, MI this March and we had an opportunity to chat about his musical background, Miles Davis, music activism, and future projects.

All About Jazz: To say that you come from a musical family would be a bit of an understatement. Can you tell us about your grandfather and how you got into music?

Keyon Harrold: My grandfather was a musician. He played the guitar and he was also a singer. My grandfather and his three brothers used to go on the road and play gigs, they wanted to be like the Temptations. Once they got back home from being on the road my grandfather knew that he had to do something so he became a police officer. He really wanted to do something to help kids so he decided to start a drum and bugle corps and through that he was able to impact thousands and thousands of kids. The drum and bugle corps helped the kids that were growing up in East St. Louis and Ferguson see life in a whole new perspective. They were able to learn discipline, learn how to work and get along with large groups of people and of course learn how to play music. That's pretty much how I got my start. All of my grandfather's grandkids HAD to learn how to play music so we are a very musical family. We all had to start out playing on the horn but my brother, Emanuel Harold actually plays the drums for Gregory Porter. My grandfather was like "look, we have enough drummers but we don't have enough horn players—so until that changes y'all have to stay on horns and then you'll get the opportunity to switch over to drums." I kept getting better and better on the horn but my brother didn't so he switched over to drums. My mother and father were both ministers and had a total of 17 kids and we are all musically inclined along with our parents so yeah, I come from a musical family.

AAJ: Do you all ever get together and play?

KH: We play together at our family reunions, different birthdays and really anytime we can get together we do. We play together, record together the whole nine. All of my sisters sing and all of my brothers play and produce so we get it in!

AAJ: What about your son; does he play any instruments or is he even into music?

KH: Yes, my son Keyon Jr. "we call him Bubba" plays the drums, he plays the bass and he also produces, (all this at 14). He's a little cool-vibey dude! (laughs). We record together. He makes music for me, with me and he does stuff with his mom. He naturally gravitated towards music. If I could have him be a doctor or something like that. But music is a part of him, it's in his blood, it's in his DNA.

AAJ: Who are some of your musical inspirations or artists that have made a profound impact on you as an artist?

KH: Man ultimately the great Miles Davis. His horn (the Moon and Stars trumpet) is right here, I'm excited to play it tonight! Then there's Clifford Brown, Freddie Hubbard, Stevie Wonder and Donny Hathaway. Transition to today's artists and I'm inspired by D'Angelo, the late great Roy Hargrove, Common and Mos Def and even though I've had the opportunity to work with these people they are still my musical heroes.

AAJ: Let's talk about the Miles Ahead movie that you worked on. In that movie Don Cheadle played Miles Davis on screen but you played all the music as Miles; what was that experience like?

KH: It was a beautiful thing! My brother Robert Glasper got called to do the film score "me and him go way back to when we were 15/16 years old" so when he was asked who would be the perfect person to come in and fill the shoes of Miles Davis he was like; "my bro Keyon Harrold. The whole East St. Louis connection, Mississippi River trumpet playing runs deep!"

So it was an amazing experience. I got to play with and learn from the legendary Herbie Hancock and Wayne Shorter. I also met my man Gary Clark Jr. "who later worked with me on