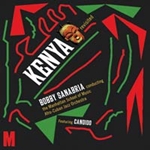 Sanabria conducts the world-renowned music conservatory's twenty-piece orchestra and plays the drums and timbales on several tracks, while legendary NEA Jazz Master Candido Camero, who was part of the original recording, is featured as special guest soloist playing the congas on "Kenya," "Wild Jungle" and "Tururato." The Latin jazz sound of today is the product of the fusing of Afro-Cuban rhythms with jazz forged in that historic recording, reinvigorated by this release which steam rolls through in sizzling fashion.

The fireworks kick off with the hot fast-paced number "Frenzy" featuring the four-piece trombone section over the rumbling drums of students Norman Edwards and Giancarlo Anderson's bongo bangs and a blast from lead alto saxophonist Justin Janer. Sanabria mans the timbales on the raunchy hip-moving "Congo Mulence," featuring Janer once again, pianist Christian Sylvester Sands and Michael Davenport on tenor sax. Mario Bauza's title track opens with the majesty of the entire orchestra weighing in before the soloists make their entrance which includes Afro tinged conga beats from Candido.

The original A.K. Salim composition, "Oyeme" is given a brand new overhaul from student Danny Rivera by reharmonizing the score, while tunes such as Salim's "Cannonology," his tribute to Cannonball Adderley, and the percussive "Conversation," seem to retain much of the original luster. Joe Fiedler provides a dynamic arrangement of Chano Pozo's signature tune "Tin Tin Deo," adding a new wrinkle featuring the trombones in a "choral" European form. The concert and live tribute comes to a delicious end with hip-moving grooves on "Mino Rama" and the almost funky and boisterous finale "Tururato" with more from Candido and Sanabria, where the vocals challenge the audience and makes them a part of the piece.

Sanabria's Kenya Revisited Live!!! captures an electrifying evening of hardcore Afro-Cuban jazz recorded in April 2008 at the MSM's Borden Auditorium in the Upper West side of New York. The music exceeds the expectation stated in the one-sheet promo which concludes that the album is "an incredible re-working of an Afro-Cuban Jazz Masterpiece." Machito and Bauza would undoubtedly be proud of this recording, a tribute to their passion-filled, percussive and pioneering music.