BY DAN BILAWSKY
April 18, 2014
Sign in to view read count
In the early moments of Effortless Mastery: The Four Steps, pianist Kenny Werner notes that he never aspired to be a guru; nevertheless, he's viewed as one by a significant number of musicians.

If Werner had never put a single word on paper or shared a single thought about the art of playing, practicing, and learning, he'd still be recognized as a major musical figure. Over the course of the past three-plus decades, he's done everything from solo dates to grand-scale work with orchestras, and he's played with everybody from saxophonist Joe Lovano to harmonica ace Toots Thielemans to vocalist Roseanna Vitro. He's respected as a leader, sideman, composer, collaborator, and educator, but despite all of this, his lasting legacy will likely be connected to his pioneering work in the musical self-help realm. Over ninety thousand copies of his Effortless Mastery (Jamey Aebersold Inc., 1989) have been sold to date, helping musicians to realize their potential and overcome physical and mental obstacles that restrict progress. These two videos help to further spread the gospel according to Werner, explaining and expanding on the concepts from his well-respected book, along with detailing his own habits and exercises to develop and grow in various ways.

Those looking for some help in breaking down some specific music topics can stop reading now and jump to the run-down on the second DVD discussed in this piece. No such lesson(s) will be found on this one. Instead, this video is all about finding a way into "The Space." Werner notes that this place goes by different names, but it's essentially the place "beneath the activity of the conscious mind." He explains that extra expended effort is often counterproductive, since the harder we try to play well, the worse we often play. He makes a good point by noting that the mind is programmable, and that much of learning this—or anything, for that matter—is about forming new habits.

The four steps, on the surface, appear to be very simple, and much of the process is about casting away fear and expectations. "Step 1" is about "Learning The Space," where you simply let go. "Step 2" is "Flight Without Flight Pattern," where you move around your instrument without allowing it to "hook you." "Step 3" is "Playing Form In The Space," and "Step 4" is all about "Practicing In The Space." Werner shares personal stories, speaking of his awakening to this method of practicing and learning at the hands of pianist Joao Carlos Assis Brasil, and wisely notes that a feeling of being overwhelmed, not laziness, often holds people back from practicing. Along the way he also references plenty of performers (i.e. Vladimir Horowitz, John Coltrane, Elvin Jones, etc.) that were able to play in this space.

Common sense practices and commonly accepted learning techniques are looked at in new ways, via the "Learning Diamond," and Werner provides several important demonstrations, working through a two-bar example on his own and working with students of various instruments, helping them with "Step 1." He reminds the viewer(s) that he's not a meditation expert, psychologist, or psychiatrist, but part of the charm and appeal of his work is related to the fact that he artfully weaves ideals connected to those disciplines into his teaching. These concepts can help any player, from novices to established professionals, but patience, both in watching and practicing, is required. 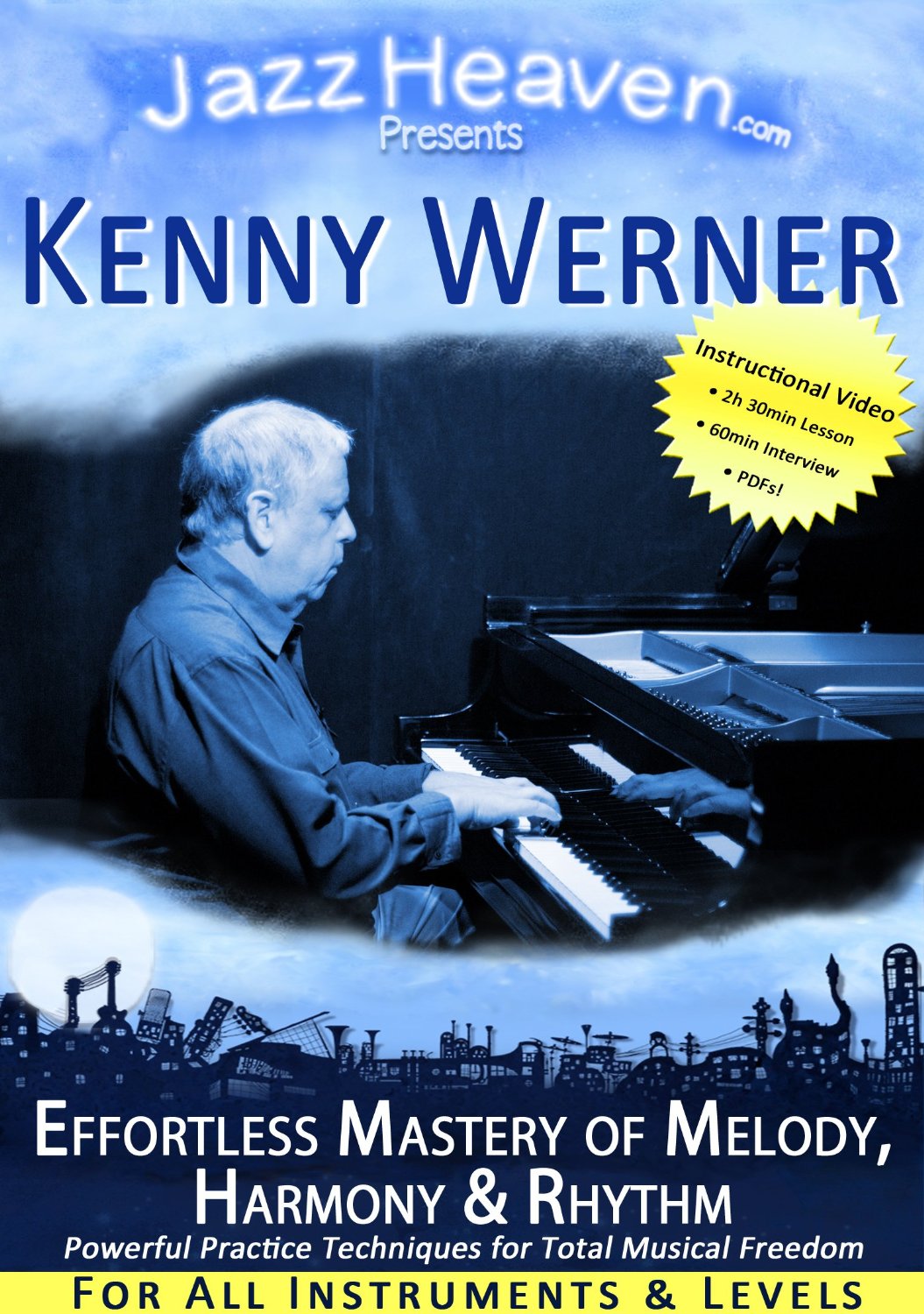 While Kenny Werner admits that he's never been one for theory books, the man knows theory backwards and forwards. Like almost everything else, he just has own way of looking at it and explaining it. Werner's introduction to this disc leans toward the more open-thinking aspects discussed on Effortless Mastery: The Four Steps, but don't be fooled; once he sits down to play and speak, the music ideas and tips start to flow freely.

In discussing melody, he focuses on the "physics of the line," bringing up the "string concept" and "point A to point B" philosophy of creation. Scalar patterns, chromatic lines, and arpeggios are referenced as options, and Werner starts to demonstrate how to use them with different resolution points as his start and finish lines. Notated examples occasionally pop up on screen to reflect what he's playing, and his hands are ever-visible on the piano at the bottom of the screen; this, in addition to his spoken comments, helps to further imprint the ideas he's working on in the mind.

Werner uses a re-harmonized "It Came Upon A Midnight Clear" as his entryway into a discussion on harmony, noting that it's his favorite subject. He then gets into an explanation on the importance of the root and chord type when it comes to harmonizing/re-harmonizing. An exercise in random chord selection is then broken down, serving as a way to learn, write and push beyond a comfort zone. Werner then works outward from there, expanding on where to go by using different chords.

Discussion of the third interconnected topic of the day—rhythm—is prefaced by Werner's statement that many players often (falsely) assume rhythm will be there if the rest of the concepts are worked out. He also notes that most of the more interesting stuff happening today is related to rhythm. Something as seemingly simple as a strong string of eight eighth notes serves as a taking-off point. Then he starts to toy with variations on the patterns, inserting a single rest into the mix and displacing rhythmic patterns, creating variation in delivery of the same idea(s). Werner ups the ante when he gets to odd time signatures and metric modulation, helping to shed some light on how to develop comfort in these areas.

The material discussed on this DVD is applicable to players of any and every instrument, but it's solid gold for pianists, as they can directly connect to what Werner's doing and saying throughout. Bonus material, including PDFs and an interview with Werner, prove helpful, adding value and additional insights. While both of these discs use the Effortless Mastery tag as a launching point, there's little-to-no redundancy here. These discs truly complement one another.