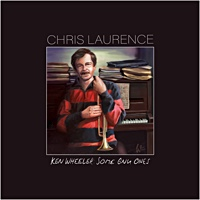 The Jazz in Britain label has made its reputation with a niche catalogue of previously unavailable archive albums, mostly recorded live back in the day by jazz greats such as the saxophonists Tubby Hayes and Joe Harriott. With the lovely Ken Wheeler: Some Gnu Ones, the label ventures more or less into the present day with three pieces written by the late trumpeter Kenny Wheeler and recorded in 2020 and 2021 by the bassist Chris Laurence, for whom they were written by Wheeler, his close friend and longtime colleague.

Only "C-Man" has previously been recorded: it first appeared in this form on Wheeler's Kayak (ah um, 1992), on which Laurence played, and in a different form as "Ma Belle Helene" on Wheeler's The Widow In The Window (ECM, 1990), on which Dave Holland was the bassist.

At twenty-eight minutes, the album is short but perfectly formed. The longest track, at sixteen minutes, is the opener (the only one to make it to YouTube by the time of writing, see below). It may or may not ring your bell, being a three-movement contemporary-classical suite. How much, if any, of it is improvised is unclear. The shorter "C-Man" and "Baroque Piece" are, however, unmistakably top-drawer jazz. The first is lively and pretty, the second a tad more astringent, though still pretty. Great solos from Laurence, Ricotti and Parricelli.