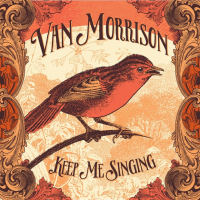 Van Morrison remains a beautifully mercurial creative force. Thirty-six discreet recordings into a 52-year career, Morrison has only Ray Charles and Willie Nelson, as poly-genre conquering peers, each of whose reach has proven to be expansive and penetrating. This is a rarified trio, to be sure, a very selective club that needs be no larger. Morrison's last recording of new material, Born to Sing: No Plan B (Blue Note Records, 2012), was an upbeat effort that was, or course all Van Morrison.

In his Penguin Guide to Jazz on CD Richard Cook posited that the late pianist Gene Harris always ended up making the same record...but that was all right, because of the elevated quality of the recordings. If imagination and ingenuity are the measures, Morrison does the same thing. While each of his recordings will have its own personality, they will still be undeniably Van Morrison. Which raised the question, "What is a bad Van Morrison records anyway. Whether listening to his seminal recordings from the 1970s, his Celtic hallucinations of the 1980s, or his idea of jazz in the 1990s, the listener always knew who was in the driver's seat. That blonde Irish honey-and-Quaaludes slur stirred into rock, country, R&B, blues just as well be a part of the grand unified theory of everything.

On his current recording, Keep Me Singing, Morrison turns on the air conditioning and relaxes. There are no hard R&B edges to be found on the baker's dozen of songs here. The singer resurrects Nelson Riddle in Fiachra Tench, who provides lush strings throughout. These strings, along with a copious dose of Hammond B3 seasoned throughout, cushion Morrison's stream-of-conscious lyrics among soft tones and well-behaved melodies. Clever are his lyrics on "Let it Rhyme,"

"Put another coin in the wishing well / Tell everybody just to go to hell / let it rhyme / in time / you'll be mine..."

"The Pen is Mightier than the Sword" is the closest thing to the blues here, with sharper electric guitar and percussion. But it is still tame when compared to "Gloria." Morrison tries to include a "Cyprus Avenue" and "Rough God Goes Riding" on every recording and he has representatives here: "In Tiburon" is a muse on the Bay Area and all of the music made there, while the gospel tinged "Holy Guardian Angel" reminds us that there is something out there bigger than we are. Morrison continues to wind is way down that Gaelic road toward eternity, rarely looking back. He ends things magically with the tuneful and sincere "Caldonia Swing." How Wonderful!

Let It Rhyme; Every Time I See a River; Keep Me Singing; Out in the Cold Again; Memory Lane; The Pen is Mightier than the Sword; Holy Guardian Angel; Share Your Love with Me; In Tiburon; Look Behind the Hill; Going Down to Bangor; Too Late; Caledonia Swing.