Shabaka And The Ancestors: Wisdom Of Elders

BY JAMES NADAL
October 8, 2016
Sign in to view read count 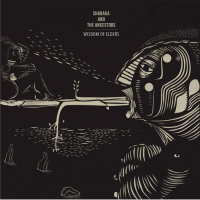 This recording is the culmination of the triangular experiences of tenor man Shabaka Hutchings and his personal destiny. Born in London, his family relocated back to their native Barbados, where Hutchings was raised in a musical environment until his teen years. Returning to London, he became a fixture on the free jazz scene, and while on holiday to South Africa, was drawn back to the primordial source of inspiration. Recorded over one day with no rehearsal, Wisdom Of Elders explores and expands upon traditional Nguni rhythms, while injecting blues, spiritual hymns, and Caribbean calypso. Accompanied by the best players from Capetown; this session transformed into a tribute to those who have played jazz in the townships, especially saxophonist Bheki Mseleku, a major influence on Hutchings, and an inspiration for this production. This is an intended throwback to the era when African jazz was played as a spiritual path to resistance and creative survival.

The bass opens the blistering "Mzwandile," which is the tribal name bestowed on Hutchings, vocalist Siyabonga Mthembu then commences his incantations, allowing Hutchings to weave his horn into an intro for the rest of the band, accented by propelling percussion and spatial piano work from Nduduzo Mahathini. Having raised the temperature at the outset, "Joyous," has a soothing effect, featuring local legend Mandla Mlangeni on trumpet, who carries on an honored tradition of South African trumpeters. Altoist Mthunzi Myubu joins Hutchings on solos, as they rise up in one voice.

"The Observer," is dedicated to a Barbadian calypsonian from Hutchings' youth, and is presented as a melancholy blues; vocal chanting invoking hope and redemption amidst the sadness. The township connection is evident on "The Sea," as the repetitive bass pattern and dual saxophones invoke the master Abdullah Ibrahim, and his extended forays into cerebral jazz. Strategically placed midway through the record, this is a soaring aural orison.

There is a slight undercurrent of reggae syncopation in "Natty," as Hutchings reaches into his mixed bag of influences, yet remains anchored in the ritualistic concept initiated. The provoking drums and sax exchange in "Give Thanks," is centered around these two instruments exclusively, both taking turns on solos and maintaining the fiery tempo. They end as they commenced, with a bass intro on "Nguni," but this time the mood is tempered as the vocal chants slowly bring it up to a crescendo. This final track is in honor of the Swazi, Ndebele, Xhosa, Zulu, and Bantu people of southern Africa, whose history and lineage reach back to the dawn of time, and whose influence on jazz is monumental.

Creating from an abiding space beyond the instruments, compositions, and arrangements, Shabaka Hutchings' African sojourn tuned him into a higher energy source, and he plays his music from that dimension. Of course, a lot of the credit goes to the accompanying musicians on this project, for they were his enthusiastic guides and accomplices on this spiritual endeavor. This is music of the utmost caliber, performed with an unrefined attitude, taking jazz back home.

Mzwandile; Joyous; The Observer; The Sea; Natty; Give Thanks; Nguni.