Keb' Mo' with Jontavious Willis at The Space at Westbury 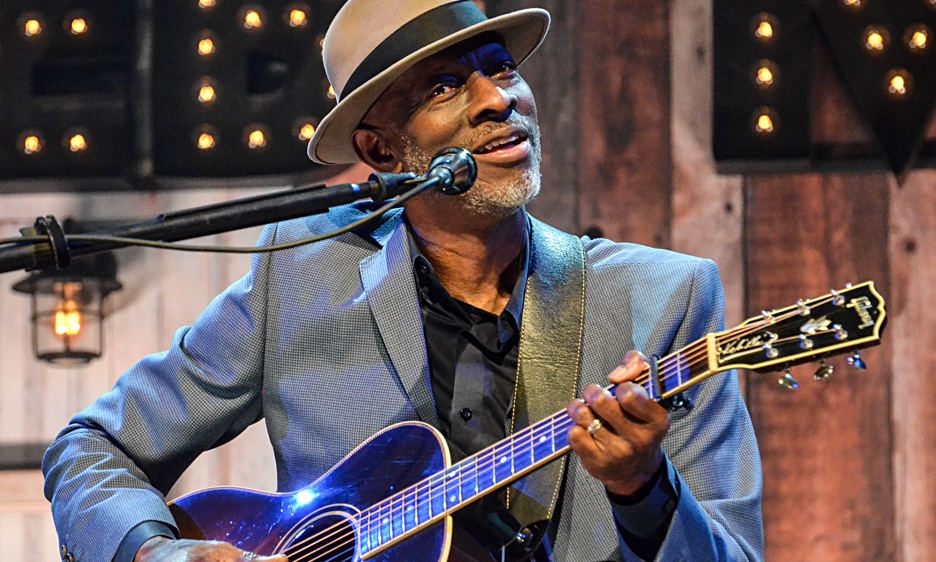 Keb' Mo' was born Kevin Roosevelt Moore to parents who were from California and Texas and fans of both the blues and gospel music. Their influences are readily apparent in his music. The four-time Grammy Award winner currently lives in the musical hotbed of Nashville, TN and has been described as "a living link to the seminal Delta blues that travelled up the Mississippi River and across the expanse of America." In addition to blues and gospel, the guitarist/singer/songwriter's musical style has been influenced by folk, rock, jazz, pop and country. The stage name "Keb' Mo'" is derived from the "street talk" abbreviation of his given name and was bestowed upon him by his original drummer, Quentin Dennard.

Keb' Mo' started his career playing the steel drums and upright bass in a calypso band. In the 1970s and 1980s, he played in a number of blues and backup bands. In the early 1970s he recorded with Papa John Creach of the Jefferson Airplane. As a guitarist, Moore appeared on four of Creach's albums: Filthy! (Grunt/RCA, 1972), Playing My Fiddle for You (Grunt/RCA, 1974), I'm The Fiddle Man (Buddah, 1975) and Rock Father (Buddah, 1976). Keb' Mo' received his first gold record for the song, "Git Fiddler," which he co-wrote with Creach for the Jefferson Starship's Red Octopus (Grunt, 1975) album. That album peaked at number one on the Billboard 200.

In 1994, Keb' Mo' released his self-titled album on Okeh Records. The album featured two Robert Johnson covers, "Come On In My Kitchen" and "Kind Hearted Woman Blues." In 1996, he released Just Like You (Epic Records). Just Like You featured twelve songs dripping with Delta influences. He won his first Grammy Award (Best Contemporary Blues Album) for this release. During his career, Keb' Mo' has been nominated for numerous Grammy Awards. He has won three additional Grammy Award for Best Contemporary Blues Album (including for the 2017 Concord Records release TajMo, a collaboration with Taj Mahal). He has also been nominated for seven other Grammy Awards. He has won W.C. Handy Awards and Blues Music Awards.

Keb' Mo' portrayed Robert Johnson in the documentary film, Can't You Hear The Wind Howl?, and the role of Possum in John Sayles' Honeydripper movie. On television, he appeared as an actor and as a performer on Touched By An Angel. In addition, he has appeared on television in Sessions at West 54th and in the Martin Scorsese miniseries The Blues. He also provided additional music for the sitcom Mike and Molly.

Jontavious Willis is a 23-year-old bluesman from Greenville, GA. He grew up singing gospel music with his grandfather at the Mount Pilgrim Baptist Church. At the age of 14, he saw a YouTube video of Muddy Waters playing "Hoochie Coochie Man" and immediately became a fan of the blues.

He got his big break when he was discovered by Taj Mahal, who described him as the "Wonderboy" and "the Wunderkind." He also got the coveted opening slot at select shows along the TajMo tour, which featured his musical mentors Taj Mahal and Keb' Mo.'

Willis' latest release, Spectacular Class (Kind of Blue Music, 2019), is the follow-up to his independently released debut album, Blue Metamorphosis (2016). Blue Metamorphosis was recognized by the Blues Foundation through their International Blues Challenge, where it was honored with the Best Self-Produced CD Award.

Spectacular Class was produced by Keb' Mo' and Taj Mahal is its Executive Producer. The CD features 10 tunes recorded with the utmost simplicity and care. Willis' vocals are spot-on and the arrangements featuring acoustic guitar, harmonica, Hammond B3, electric guitar, mandolin and banjo make this CD a must-have.

His musical oeuvre touches on country blues, acoustic blues, old-school blues, R&B, gospel and good old-fashioned Americana. His fans describe him as an old soul with a beautiful voice and a wonderful playing style. To paraphrase and somewhat mangle Jon Landau, I have seen the future of modern acoustic blues and his name is Jontavious Willis!

On a cool but pleasant Wednesday evening in Westbury, NY, Keb' Mo' and Jontavious Willis awakened and energized the sleepy suburb with an amazing evening of solo blues performances.

Willis was on first. The majority of the somewhat skeptical New York audience members hadn't gotten to their seats when Willis began picking, strumming and singing "I'm Going Down to New Orleans to Get Me a Mojo Hand." The soon took notice and settled in and were enraptured by his mix of Delta, Piedmont and Texas blues. Willis took the crowd on a wild ride that included fantastic acoustic versions of "She Might Be Your Woman," the instrumental "Hot Dog," "Train Song" (with its musical story and outrageous harp parts), "Long Winded Woman," the covers of Prince's "Kiss" and James Brown's "Sex Machine" and his finale "The Howlin' Tomcat."

During the set, and at its, end Willis mentioned that he'd be at the merchandise stand during intermission. He said, "If you want to come see me, I'll be in the lobby at the table during the break. I'll have CDs for sale, but you don't have to buy them. If you just want to come and say, 'hi,' I'd love to meet you." The line stretched through the lobby as new fans vied to meet Willis, shake his hand, purchase his CD or LP and get his signature.

After a short intermission, Keb' Mo' appeared on the stage. The stage set was that of a country cabin's living room with a wood plank backdrop and a turntable on a cabinet that also featured an old-time wooden radio, vinyl records and his guitars lounging on the stands set to the side. Dressed resplendently in a grey suit with a sight/light check in its pattern, a dark collared shirt and a cream fedora, the bluesman delivered an amazing evening of solo soulful blues. The blues legend with the unmistakable voice played tunes from his award-winning solo offerings, thrilling the crowd with an evening of blues, Americana, and hefty splashes of country and gospel.

A Keb' Mo' concert is a happening. His fans love him and worship at his altar. The man is kind and unassuming. He even mentioned that he loved the Italian food that was catered and served in his dressing room. He punctuated his approval by stating, "Y'all got some good food in this neighborhood. Gino's! Mmmmmm!" Even when his fans took it a bit too far, he continued to be cordial, interacting with them when they approached the stage to have what, they felt were, private conversations in the musician's living room. The vast majority of the fans, though, were reverential and were happy just to be in his presence. That is not to say that they just sat in their seats. The fans in attendance on this evening sang-along, cheered and occasionally slow-danced in the aisles on the slower tunes.

Keb' Mo' treated the audience to a selection of tunes from his new album Oklahoma (Concord Records, 2019) including the title track and "Put A Woman In Charge" as well as some of his classic songs like "Angelina," "Henry," "Life Is Beautiful," "Suitcase," The Whole Enchilada" and a sing-along version of "The Old Me Better" which features the lyrics: "I liked the old me better, I was a lot more fun.

At one point, he stopped and asked if the audience members liked vinyl records. When they cheered their approval, he stood up, put down his guitar and grabbed an album from the stack next to the turntable on the cabinet and dropped the needle on an Aretha Franklin album. The venue was filled by the late legendary singer's beautiful voice as Keb' Mo' and the crowd sat back and enjoyed the moment. Other highlights included "She Just Wants To Dance," "I'll Be Your Water" and "Government Cheese."

The evening was special. There were so many reasons, but for many, in addition to the fantastic music, it had to be due to how genuine Keb' Mo' is as a performer. His music and singing has a warmth and vitality that can't be faked. The man enjoys his work and it shines through. His songs tell stories as he entertains his audience.