By Doug Collette
June 29, 2019
Sign in to view read count
Blues Deluxe is a regular column comprised of pithy takes on recent blues and roots-music releases of note. It spotlights titles in those genres that might otherwise go unnoticed under the cultural radar. 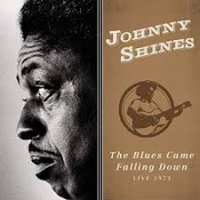 The cumulative force of Johnny Shines' performances here, recorded nearly a half-century ago and unreleased until now, deliver an impact that belies his lone voice underpinned with single acoustic guitar. Given the man's self-effacing understatement, the force is remarkable, all the more so because it continues virtually unabated for the entire eighty-minute duration of this CD's playing time. Apart from the four songs of blues icon Robert Johnson here, more than a few titles here will no doubt be familiar to blues aficionados (perhaps in slightly different form by different names), but those like "I'm A Steady Rollin' Man," "Someday Baby Blues" and "Ramblin'" should also strike a resounding chord with those who learned of them indirectly via practicing contemporary students of the genre such as Eric Clapton. The elegance of the artist's stage presence here further reaffirms the legitimacy of his near-legendary status, rendering (almost) superfluous the essay by Leroy Jodie Pierson, Nighthawk Records founder (and participant on two tracks of the twenty here ). 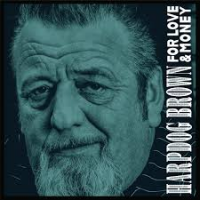 In the best possible sense, Harpdog Brown sounds like he just stepped out of another era to play his jump blues crossed with r&b on For Love & Money. The horn arrangements as applied to "Blue Light Boogie" complement his harmonica playing as smoothly as they do the frontman's vocals, all of which is readily apparent via the clean, clear recording (by Sheldon Zaharko) and mastering (by Graemme Brown). That engineering, in fact, may be the one concession to modernity on this record as, in the form of tracks like "Reefer Lovin' Woman," the music is otherwise a thorough and complete, not to mention, wholly authentic homage to a sound and style originally captured on 78-rpm records. Such an achievement is admirable enough in itself, but all the more so here because it arrives via the array of consistently empathetic interactions among the players here; everyone involved can take pride in their work, not the least of whom is producer Steve Dawson. 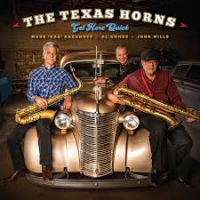 On Get Here Quick, The Texas Horns illustrate how sharp charts can make, break or, in this case, render an album worth hearing, solely on their own terms. That said, it's not as if Mark "Kas" Kazanoff, Al Gomez and John Mills do it all by themselves: guitarists Carolyn Wonderland (on "I'm Doin' Alright At Least For Tonight") and Ronnie Earl (on "Fix Your Face") are just the most high-profile names to lend assistance to an effort that restores a positive connotation to the word 'slick.' Elsewhere, a rhythm section usually anchored by drummer and percussionist Tommy Taylor draws almost as much attention as any other component of these arrangements. Accordingly, the top-billed trio deserve additional kudos for the shared humility that allows ample space for their kindred spirits to shine on these generally saucy performances, even apart from instrumentals such as "Feelin No Pain." 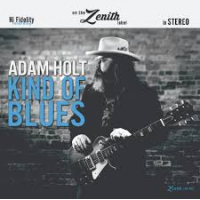 As the final track of ten on Kind of Blues, the countrified reading of Bob Dylan's "Lay Lady Lay" is quite a contrast to the sharp, upbeat blues rocking that precedes it But it's just as authentic in its own way as cuts like "Mr. Morning Drive" and "The Bourgeoisie," where, within the frontman's seven co-musicians here, guitars sharply twist and turn above steadfast and bracing rhythm work. Echoes of North Mississippi Allstars may be a little too loud on "Don't Give Up On Me Baby," but the Alabama singer/guitarist/composer could certainly hoe a less fertile row: his work here is just as much an extension of the more mellifluous side of those icons of Southern rock, The Allman Brothers Band (and there are some flashes of CCR here too). Along those lines, Adam Holt and company's reach would probably not exceed their grasp if they stretched out more often, as they do on that aforementioned track; the longest in duration on this long-playing effort, ably recorded in the man's own analog studio, its very sound of it echoes the antique likes of the music upon which it is based. 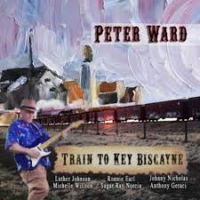 Given that Peter Ward wrote and produced all the songs on Train to Key Biscayne, the nonchalance he brings to tracks like "The Luther Johnson Thing" is all the more surprising. But that insouciance is certainly no less pleasurable because that attitude precludes the solemn correctitude that so often afflicts roots music, perhaps especially his preferred style of electric blues. Furthermore, what becomes borderline wondrous as these dozen tracks unfold is hearing his lighthearted but no less authentic approach also permeate the work of the accompanists he's invited to participate: Sugar Ray Norcia's harmonica is particularly notable for its airy tone on "When You Are Mine," while Aaron Gratzmiller's saxophone on the titletune attains the same lofty altitude. "I Saw Your Home" is something of a non-sequitur here however: even with Michelle Willson on lead vocals, it sounds like a Bruce Springsteen/E-Streeters copy, no more no less. Fortunately, it's a one-of-a-kind gaffe on an otherwise exemplary demonstration of fastidious attention to detail, seasoned with an engaging sense of play.

Tracks: Big Boy Boogie; Seems Like A Million Years; Cold In Hand Blues; Kind Hearted Woman Blues; Have You Ever Loved A Woman; Stay High All Day Long; Stand By Me; I'm A Steady Rollin' Man; Happy Home; Someday Baby Blues; They're Red Hot (Hot Tamales); You're The One I Love; Sweet Home Chicago; The Blues Came Falling Down; Big Star Falling; Tell Me Mama; Ramblin'; It's Nobody's Fault But Mine; Goodbye Boogie; How You Want Your Rollin' Done.

Tracks: No Eyes For Me; Blue Light Boogie; The Comeback; Reefer Lovin' Woman; A New Day Is Dawning; vicious Vodka; I'll Make It Up To You; One Step Forward; Stiff; For Love And Money; buzzard Luck; Thinkin' And Drinkin'; Sasha's Lullaby.

Tracks: The Luther Johnson Thing; A Westerly Sunday Night; When You Are Mine; Train To Key Biscayne; I Saw Your Home; Blues Elixir (Ronnie's Here); Supposedly; Change (Ain't Never For The Good); As Long As I Have A Chance; Coffee Song; Something Always Slows Me Down; Anthony's Son.

Tracks: Mr. Morning Drive; Don't Give Up On Me Baby; Bobby; I'm Still Holdin' On; Before I Trusted You; Give The Dog A Bone; The Story Must Go On; The Bourgeoisie; The End; Lay Lady Lay.