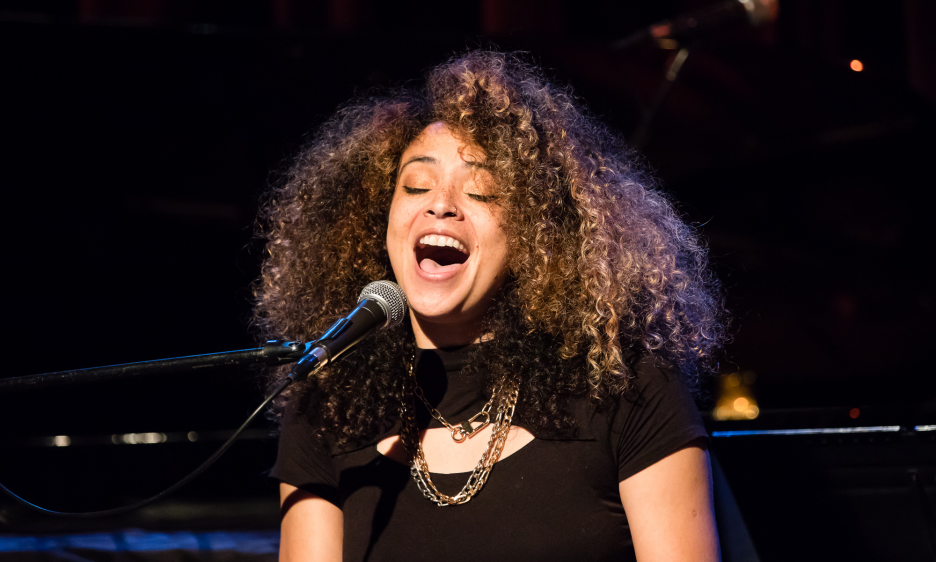 Seattle's premier jazz showroom, Jazz Alley, celebrated its 40th anniversary in anonymity during the pandemic lockdown. John Dimitriou's 400-seater in the Belltown neighborhood grew from humble beginnings in the city's University district, where "The Alley" was hatched as a 100-seat bistro.

The bounce-back from the doldrums of COVID isolation has been a strong one, however, with the club returning to hosting national touring acts on a regular basis. Such was the case for the four-day, six-show double bill staged February 24-27 with striking pianist/vocalist Kandace Springs and vibraphone star, Sasha Berliner. The run's final show, a 7:30 Sunday night tilt, was perhaps the most relaxed of the run, with both Springs and Berliner creating an extra dose of intimacy with the enthusiastic, all-in Seattle audience.

Berliner's set confirmed the initial inclination to avoid saddling her with the "up and comer" tag, or the "young mallet star" designation. Despite her tender age of 23, Berliner plays, composes and leads her band with maturity and artistic presence rarely attained. Being concerned with what she has in store for us in the future as a rising star is at this point, and was on that evening, irrelevant. Berliner is in the firmament of the here and now in modern jazz, and appears likely to occupy that upper stratosphere for some time to come.

Berliner appeared with her West Coast configuration, featuring pianist Paul Cornish, drummer Jonathan Pinson and bassist Max Gerl, performing mostly originals, two of which are to appear on a new recording due this summer. The set was acoustic, eschewing electronic enhancement. The vibraphonist's style draws from her musical background that includes experience as a rock drummer, utilizing both two-and four-mallet techniques. Through originals like the opener, "Jade," Berliner played with great harmonic innovation, something well embedded in her approach by her mentor, Stefon Harris. "Reasons" revealed an almost telepathic connection with Pinson, a pairing that drove the band through moments both intense and tender. The thoughtful, spacious comping of Cornish playing behind Berliner's four-mallet, chordal attack, shined with elegance, as did his solo work. His lines bore highly melodic marks, at times contrapuntal to Berliner's lush, melodic washes, and quicksilver runs. With a focus that is mindful of tradition, but relentlessly modernist, Berliner is one of the true bright lights in jazz on an international scale.

Springs pressed bassist Gerl into double duty, adding marvelous drummer Camille Gainer Jones to the mix. With both Springs and Gainer Jones bearing soul and r&b marks in their individual styles, the set featured tunes from Springs' latest release, The Women Who Raised Me (BlueNote, 2021) as expected. From the outset, the attribute the audience most benefited from was the down-to-earth, house concert vibe Springs almost immediately ushered in. She appeared to have no set list, and established a very personal connection with the Jazz Alley audience of 300 souls.

Whether launching into "Devil May Care," swinging it hard behind the energetic push provided by Gainer Jones, or showing her melancholic side with the original, "Place to Hide," Springs demonstrated what all the hullabaloo is about her, and why Blue Note came knocking on her door. Playing the sixth set of a six-set run, she churned through the ninety-minute set with a relaxed feel and genuine joy. Her piano and Rhodes work, which is more than adequate, seemed to sparkle a bit more, with Springs going as far as to quote Chopin in the middle of the set. "I'm about to Chopin your ass," she exclaimed gleefully to the delight of the audience.

In terms of vocal artistry, Springs did not disappoint. While her latest release is an homage to those that came before her, she is beginning to establish herself as one to be emulated by young, strong women artists that are to come.

Perhaps the most stunning moment of the evening was her rendition of Billie Holiday's "Strange Fruit," an iconic composition seldom broached in modern jazz performance. Accepting a request to play it, Springs played sparingly through the changes, eyes closed, trying to find a feel for the tune, before finally engaging the melody. The focused, yet relaxed approach she followed the entire evening was evident in her interpretation of Holiday's powerful narrative, her bandmates allowing her the space to go it alone.

It must be mentioned that a double bill, at one of the country's premier jazz showrooms, featuring two strong, innovative female artists was wonderful to experience. We can look forward to the day when it is so commonplace in jazz that this mention would not be necessary. In the meanwhile, we must stand inspired with great love, respect and hope.