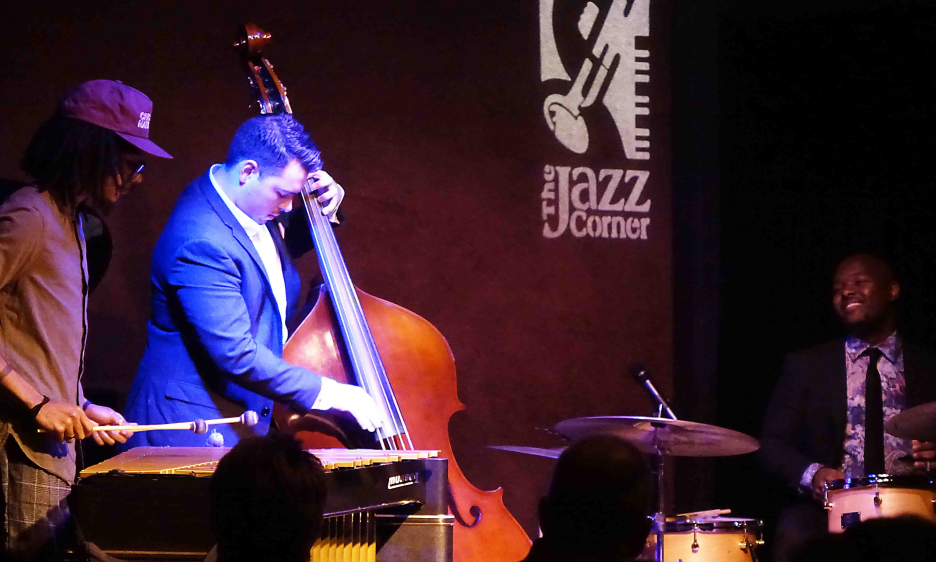 The special relationship between jazz drummers and bass players could never have been more obvious than on two consecutive weekends at The Jazz Corner in September 2018. Holding down the rhythm and bass line together, the players don't always receive the exposure they deserve. That omission was resoundingly rectified.

On September 21 & 22, drummer Justin Varnes from Atlanta was as sharp as ever on his own kit, wood rimmed except for the snare drum. He brought his trio to The Jazz Corner fresh from playing several weeks in China. Nick Rosen played piano and added a keyboard to give variety to his sounds, Kevin Smith was solid on bass, notably carrying a long solo on "Somewhere Over The Rainbow." The trio backed their new singer, Sachal Vasandani, who was promoting his own CD, Shadow Train (GSI Records). Strong in the lower register, Vasandani favored the Las Vegas show style of presentation, with a good feel for standards and plenty of energy . A particularly quiet version of Irving Gordon's "Unforgettable" with light brushes from Varnes was rewarded with warm applause. In December 2017, Varnes brought the Duke Ellington version of Tchaikovsky's "Nutcracker" to The Jazz Corner. He continues to search in the rich vein of classical themes for music which jazz rhythms would enhance.

The next weekend, drummer Ulysses Owens, Jr. came to Hilton Head on a South East US tour, playing The Jazz Corner together with the exceptional talent on bass of Philip Norris who at twenty-one years of age, still has exciting potential to grow in his music. "Three" is the name of the trio, with Joel Ross the third musician, playing the house vibraphone which was purchased when the club opened almost twenty years ago. George Shearing inaugurated the club March 31 1999, but at sound check there was a problem. From his piano with the pitch set at A440 Shearing declared the new vibes were at A442. A nervous call to the manufacturer confirmed they had recently changed their setting , so the piano pitch had to be quickly re-set.

Ross gave the vibes a work out, from the softest touch of a finger to racing mallets up and down the bars. The sustain was sometimes held so long it became piercingly discordant, sometimes held just enough to roll the mellow sound around the walls. .

Grammy award winner Owens showed his mastery from the first tap, at one point building a crescendo on the crash cymbal while at the same time holding the rhythm by clicking his sticks. The highlight was a sensitive version of the standard "Tenderly." The melody was carried gently by Norris while the drums brushed quietly along and the vibraphone added touches of sound. The room was pin drop quiet, This was a beautiful rendition of the Walter Gross classic.

The overwhelming impression from the evening was that Ulysses Owens Jr. is a great talent and also a genuinely nice guy, ready to share his music with bright young stars and explore a lighter style of jazz, close to the melody.

Promoting live jazz because... you had to be there.