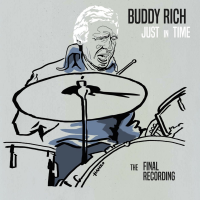 There are few sounds in jazz as thrilling as a big band in full flight. And a big band led by Buddy Rich promises to send the listener's dials into the red. The live album Just In Time: The Final Recording delivers on the promise. When London club owner Ronnie Scott introduces Rich, he dispenses with any of his oft-repeated, well-loved jokes and nails it simply and definitively: "A big hand please for the world's greatest drummer. Ladies and gentlemen... Buddy Rich."

The album was recorded over two nights in November 1986. The band had performed at Scott's club frequently since Rich formed it in 1966, and after a while each visit felt like a homecoming, for Rich and the audience. On November 19 and 20, 1986, the place was packed, as always, and the atmosphere was electric. Fortunately, for this would be Rich's last visit (he passed in 1987), the Rolling Stones' mobile studio had been hired to record both nights.

This particular band lineup had been together for two years and was a well-drilled unit. Rich himself was at the top of his game. He was, after all, still the right side of 70 years old, and appeared to be in robust health, the cardiac problems which had long plagued him apparently under control. The engagement was a triumph.

There are 72 minutes of frequently high-impact, always swinging music on this CD. Most of the tracks are short and sweet, clocking in at around four minutes. At ten minutes, the penultimate suite from George Gershwin's "Porgy And Bess" is by far the longest. It is also one of the most familiar, because, intending to release highlights from the engagement as an album, Rich presented a programme which avoided most of the warhorses in the band's book, with Freddie Hubbard's "Up Jumped Spring," for instance, balancing Cole Porter's "Love For Sale."

As things worked out, it has taken 33 years for the release to happen. It has done so thanks to the determination of Rich's daughter, Cathy, who closes the album in fine style with Annie Ross' "Twisted."