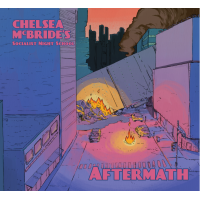 Carve out an hour to listen to Socialist Night School's Aftermath because the combination of big-band music and progressive, challenging lyrics demands it. There's no way to let either simply wash over the ears. The music is too blunt, the lyrics too developed and too integral to absorb passively.

The follow up to the equally ambitious The Twilight Fall (Browntasaurus Records, 2017), Aftermath is once again the brainchild of tenor saxophonist, conductor, and composer Chelsea McBride. With its combination of discursive statements and poetic verse, Socialist Night School makes no bones about its progressive politics or its intent to drive discussions about economic fairness, social equality, and the effects of division on the human heart, a narrative developed over the course of the album's ten diverse pieces.

Marked by skilled arrangements and bold orchestrations, the ten tracks range from the funky, soul-singer infused "Revolution Blues," to the tongue-in-cheek ode to capitalism "House on Fire," to the celestial, trumpet-driven "Ballad of the Arboghast." Other notable tunes include the arching "The Void Becomes You," the tumbling, desperate "Niagra" and its companion "Fly By Night," a two part suite exploring bipolar disorder; and the pulsing "Porcelain."

A stylistic panoply, Aftermath is a unique experience, musically and conceptually. Chelsea McBride and her adept big-band have once again delivered a thought-provoking, expansive project that, though marred by occasional indulgences, sounds good at the same time.

Revolution Blues; Say You Love Me; The Righteous and the Wicked; Ballad of the Arboghast; House On Fire; The Void Becomes You; Fly By Night; Niagara; Porcelain; Love Is On The Line.