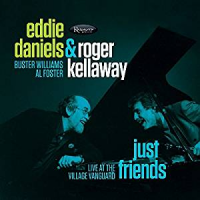 Adding to this latter group is the present Just Friends: Live at the Village Vanguard featuring clarinetist Eddie Daniels and pianist Roger Kellaway (in the company of bassist Buster Williams and drummer Al Foster). This is a live recording, from New York City's fabled Village Vanguard on November 26, 1988, captured using a single Sony ECM-939LT Stereo Microphone recording to a cassette tape) placed on a table in front of the stage by one George Klabin, Resonance Records' producer. On the front end here, the sound of the recording is really very good. The technology revolution that has occurred over the past 30 years has the capacity of salvage many recordings like this. To the credit of Resonance engineering, this is a very well-presented concert, sonically.

That said, the sonics are only the beginning of this recital's charms. The recording is made up of extended considerations of four original compositions, two by Daniels and two by Kellaway, and a single standard, the title track. The setting and presentation are close and intimate. The swing is nuclear, driven by a better than superb rhythm section. The two protagonists of the show sound relaxed and as if they are enjoying themselves. The disc opens with Kellaway's nominal blues "Some O' This and Some O' That," which kicks off this a complex and circuitous head, before straightening out into a lengthy stroll. Daniel's "Reverie for a Rainy Day" is a loping and precise ballad, carefully constructed and thoughtfully arranged. It allows Daniels freedom to color outside the lines to a beneficial effect. "Samba for Wolfie" is a wonderful take off of Mozart's Clarinet Concerto and Quintet in A major. It is finely crafted, sporting Daniel's generous sense of humor and wonder. Kellaway responds in kind, the two producing a completely satisfying miscibility at the interface of classical and jazz.

The title piece is the longest of the selections, ringing in at just over 17 minutes. Daniels injects a bit of freedom into the introduction, a freedom immediately met with Kellaway's considered ruminations. The two take their time developing the old song, approaching the familiar melody covertly as if by night. The quartet does not fully dispense with the freedom aspect as they present the song as a freewheeling interpretation that incorporates a good bit of jazz history through the late 1980s. Williams provides a long and introspective solo that softens any sharp edges the performance has. The disc closes with a length take on Kellaway's exhilarating "The Spice Man." The complexity that characterized "Some O' This and Some O' That," is amped up to eleven on a scale of ten, producing a thrilling high-wire-act-without-net. Again, Williams solos, this time arco, issuing a slightly dissonant vision within the complex piece. Drummer Foster solos before everyone joins in for an explosive coda, signaling the end of a fine performance. It is all pretty good for a concert captured on cassette tape nearly 30 years ago.