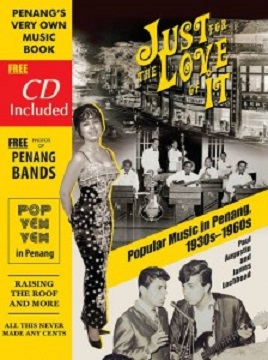 The story of popular music in Penang—the Malaysian island by the Straits of Malacca—from the 1930s to the 1960s is—as co-authors Paul Augustin and James Lochhead graphically depict—a tremendously colourful tale. And little wonder, for as Lieutenant-Governor Sir George Leith observed in 1804: "There is not, probably, any part of the world where, in so small a space, so many different people are assembled together, or so great a variety of languages are spoken."

Leith's comment came less than twenty years after the British colonialists founded George Town. With the establishment of a major port there, the indigenous Malay communities soon found themselves sharing their tropical island with immigrants from far and wide.

In addition to the British rulers, Chinese, Arabs, Armenians, Persians, Siamese, Burmese, Indians and Europeans—amongst others—gradually swelled Penang's population. "The consequences for every aspect of life, including its music," state the authors, "were to be momentous." Gongs, frame drums, bowed and plucked instruments, flutes and any number of exotic instruments from different cultures found their way to Penang, along with a cornucopia of musical traditions.

This beautifully illustrated coffee-table book is neither an ethno-musicological study nor is it intended as an in-depth history—its scope is too broad for that. Instead, it presents a sweeping narrative that highlights the major events in the evolution of Penang's popular music and the principal players in the story.

The seeds for this book were planted a decade ago, when Augustin—Director of the Penang Island Jazz Festival—and Lochhead—reviewing the festival for a local newspaper—discovered that the musicians participating in the PIJF's Jimmy Boyle Young Talent Competition had never heard of Boyle—a brilliant pianist and a prolific composer who was active from the late 1930s until his premature death in 1971.

Augustin and Lochhead were saddened that Boyle—whose music ranged from indigenous Malay music to jazz—and other important Malaysian musicians were known only to an older generation. The authors were moved to curate an exhibition on Penang's musical heritage in Penang State Museum in 2010. Such was the response from music lovers that the project snowballed into this handsome tome.

Needless to say, Boyle—whose jazz piano drew praise from the likes of Jack Teagarden and Charles Lloyd and whose music was played on the Voice of America—is accorded ample essay space. "Jazz is here to stay," Boyle told a newspaper in 1959, "irrespective of what has been said, is being said and will be said about it." Jazz in Penang is dealt with by the authors only in passing, raising questions as to the music's popularity during those years. Boyle's words, however, have proved prescient, with jazz festivals—besides the PIJF—held today in Kuala Lumpur, Miri, and Kota Kinabalu—though that's another book in waiting.

Augustin and Lochhead pay tribute to these visionary, pioneering and hugely talented figures of yesteryear who paved the way, as well as to many lesser lights of popular music—the countless amateurs who played the bars, clubs, hotels and social gatherings over many years.

Whilst the story of popular music in Penang in the decades either side of World War II is certainly full of striking individuals, the authors succeed in portraying the bigger picture—that's to say, the economic, social and political waves that form the backdrop—and that were more usually the catalysts—to Penang's musical evolutions.

The multitude of nationalities that poured into Penang and George Town from the eighteenth century onwards—bringing their musical traditions with them—were drawn there not only out of economic necessity or adventure but by a religious tolerance inscribed by law. This led to the largely peaceful coexistence of different groups, culturally "resulting in permeations and permutations that would give Penang's popular music of later decades its particular fusions."

One example of such fusions was the dance form boria. Originally performed at religious ceremonies, this dance of Persian origin evolved over the years, absorbing musical and theatrical forms from the Middle East, the Philippines, Thailand and the West, becoming secularized and more popular in the process. Another imported dance form, bangsawan, from India, was widely performed and recorded by all the major record companies of the day.

The creation of the deep sea port in Penang, the authors relate, permitted the arrival of ocean liners, and with them came the latest jazz records, gramophones and scores. If beforehand music had been largely ritual and ceremonial in nature, with the British came the concept of music as leisure. For affluent Asian families in the 1920s Western fashions were all the rage and jazz bands were a common feature in their private parties.

In spite of, or perhaps because of the Great Depression, the entertainment industry in Penang thrived. The chapter on the multi-faceted amusement parks-where traditional dances, films, joy rides, eateries, gambling and various styles of music happily co-existed—paints a nostalgic picture of a carefree, fun-loving society.

By contrast, the chapter dealing with the Japanese occupation of Penang in the 1940s shows how music was controlled as a political tool. A colorful piece of Japanese propaganda reprinted from a Singaporean newspaper in 1944 proclaims: "Our enemies, in an attempt to destroy the peoples of East Asia...had mixed a deadly potion into their hideous music. With various noisy and debased musical instruments, they created music without any great depth or feeling or artistic value, and with the devilish utilisation of it, they schemed to steal into our souls and poison us slowly and unknowingly from within." Western music was all but banned by the Japanese though some brave musicians played Western songs with the lyrics sung in Malay. At the same time, the Japanese/Asian music that predominated was, the authors state, welcomed by many musicians "who were happy to assimilate more Asian styles and rhythms."

In Penang, as everywhere else in the world, the arrival and diffusion of radio and cinema was to have a profound influence on popular music, gradually sounding the death knell for the old amusement parks and ushering in new styles of music. Later, in the 1960s pop and rock music, the jive and the twist would displace older dance forms, which the authors observe, struggle to survive in the twenty first century as 'heritage' music/dance.

The return of the British in the aftermath of the Japanese surrender saw music once again become politicized, as a thirteen-year insurgency with the aim of independence saw ethnic nationalisms arise. Yet despite the periodic waves of music nationalism and diverse ethnic traditions, the story of popular music in Penang, Augustin and Lochhead reiterate, is very much one of shared music culture. This is typified, not only in the popular communal dances, but more specifically in the hybrid music of the Baba Nyonya—decendants of migrant Chinese men and Malay women, and the founders of modern Penang.

Beautifully illustrated with hundreds of photographs and period advertisements that bring the text alive and evoke the atmosphere of the times, the book is accompanied by a wonderfully eclectic twenty-four track CD that represents many of the leading musicians/composers.

The music is remarkably varied, from Malay-influenced ballads and harvest songs to a multi-lingual take on a Mandarin tune, and from Herb Albert-esque orchestras to dreamy Hawaiian vibes. Latin rhythms, country and western, Hank Williams-type yodelling, swinging jazz standards and ukulele music rub shoulders. Popular Chinese song, rock 'n' roll and film songs are all represented, as is the great Jimmy Boyle, with a haunting solo piano recital.

Agustin and Lochhead's painstaking research has clearly been a labor of love. The authors' portrayal of Penang's popular music from the 1930s -1960s is as colorful as the island's tropical flora and fauna and as vibrant as the bustling multi-ethnic melting-pot that is George Town. Together, the authors have done a great service towards the preservation and further understanding of Penang's rich musical heritage.