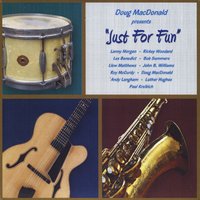 While there are no household names on guitarist Doug MacDonald's new 2-CD set, Just for Fun (alto saxophonist Lanny Morgan or perhaps drummer Roy McCurdy may come closest), the sidemen he has chosen for a lively concert date billed as a "jazz marathon" are more than likely among the more accomplished jazz musicians you've seldom or never heard. To bolster that appraisal, one need look no farther than tenor Rickey Woodard whose solos are models of perception and coherence, or trumpeter Bob Summers who seems incapable of blowing any note that is less than precise and exemplary.

The "marathon" was proposed to MacDonald in early 2014 by a friend, Don Thomson, who had produced several of them in his home state of Hawaii. The idea, which MacDonald readily embraced, is to employ front-liners in various configurations along with a pair of rhythm sections so the music is uninterrupted and the concert lasts for several hours. Pianists Llew Mathews and Andy Langham take turns at the keyboard, as do bassists John B. Williams and Luther Hughes and drummers McCurdy and Paul Kreibich on their axes. McDonald plays on ten of the twelve numbers, Morgan on seven, Woodard, Summers and trombonist Les Benedict six apiece. The concert / marathon was held September 2, 2014, at redwhite+bluejazz in Pasadena, CA.

As befits a long-distance event, most selections run for more than ten minutes, the others close to it, leaving ample room for inspired blowing by all hands. In addition, there are extended features for Morgan (Sonny Rollins' "Airegin"), Woodard ("Day by Day"), MacDonald (Luiz Bonfa's "Samba de Orfeu") and Benedict ("I Thought About You"). Summers has no feature as such, but every solo he takes qualifies as a highlight, starting with Disc 1's brash opener, MacDonald's "Unimpressed" (he also wrote "G Jazz Blues," which follows, and the "Magic Lamp," which closes Disc 2). The other numbers should be familiar to almost everyone: Charlie Parker's "Yardbird Suite" and the standards "Softly as in a Morning Sunrise," "I Love You," "Autumn Leaves" and "On Green Dolphin Street."

As noted, everyone (including MacDonald) brought his "A" game, and the audience response is invariably warm and enthusiastic. If there is any cause for censure, it is that Mathews and Langham deserved a better piano. Aside from that minor blemish, there isn't much with which to find fault, as Just for Fun is a bright and charming panorama from start to finish.