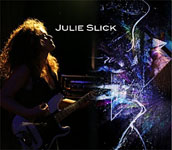 Despite a sudden explosion of female bassists—from Aussie Tal Wilkenfeld (Jeff Beck, Herbie Hancock, Chick Corea) to acoustic bassist/singer Esperanza Spalding (Joe Lovano—assessing them on the basis of gender would be wrong, since every one of them easily stands beside their male counterparts. The same can be said for Julie Slick, still on the shy side of 25 and with a remarkable number of high profile credits in the progressive rock world, including King Crimson guitarist Adrian Belew's Power Trio, responsible for the live Side Four (Self Produced, 2007) and e (Self Produced, 2010). Since joining the Paul Green School of Rock Music in 1998 at the age of 12, she's gone on to record and/or tour with artists including The Police's Stewart Copeland and Yes' Jon Anderson. Slick's self-titled debut reflects the progressive tendencies of her recent work with Belew; a studio concoction of fourteen originals, where she layers keyboards, programming and guitar, in addition to some stunning electric bass work.

Largely a solo effort in the most literal sense of the word, Slick does recruit guests from the progressive/fusion world, including brother/drummer Eric (her rhythm section mate with Belew), Crimson drummer Pat Mastelotto, and conceptualist/drummer Marco Minnemann, whose 51-minute Normalizer 2 improvised solo has inspired a series of albums composed around it, including guitarist Alex Machacek's stunning 24 Tales (Abstract Logix, 2010)). The biggest recruit, however, is guitarist Robert Fripp—though, not unlike Norwegian live sampler Jan Bang's remarkable ...and poppies from Kandahar (SamadhiSound, 2010), Fripp's presence isn't direct; instead, Slick grabs pieces of extant performances, including "Sometimes God Hides," from Pie Jesu (DGM Live, 1997), around which she has written two tunes: the obliquely funky "Shadow Trip," and fierier "Spice Trade," where Slick augments the Crimson co-founder's expansive soundscapes with some sonic coloring of her own.

Slick also uses Fripp's "Scanning II," from Sometimes God Hides: The Young Person's Guide to Discipline (DGM Live, 1997), for "Choke," combining otherworldly sonics, high octane drum programming, and a relentless, Tony Levin}-esque bass line. The Crimson bassist stick man is a clear influence throughout Julie Slick, as the younger bassist manages to groove relentlessly while creating memorable bass melodies. Just as group improvisations with Levin have led to Crimson songs like "Elephant Talk," so, too, does Slick build many of her tunes from the bottom up, most notably the alien landscapes of "Awoke" with its myriad of sounds traveling across the landscape in addition to Alex Schmidt's fuzz- toned, heavily processed guitar.

In and around the three-minute mark, most of the music may be pop-song length, but is more akin, in form, to miniatures from early Brian Eno albums like Music for Films (Virgin/Astralwerks, 1978). Some of Slick's songs could, indeed, be considered soundtracks to imaginary films, but they're more inherently commanding than Eno's subliminal soundscapes. Far more than an album of impressive bass playing (and it is impressive), Julie Slick suggests that this young up-and- comer is as comfortable at the helm as she is as first-call bassist for an increasing number of high profile progressive rockers.