By C. Michael Bailey
August 18, 2010
Sign in to view read count
A myth exists in singer Lawrence Lebo's family that the pixie-banged brunette with the warm and humid presence, and encyclopedic American musical view, was conceived during a Saturday night re-run of the Lawrence Welk show—hence, the name.

That name. Lawrence Lebo. Delicately avoiding strict political correctness, "what kind of name is that for a girl?" The answer to that question is part of the myth of the image and music.

Too clever by half, Lebo need never have another collection title, Don't Call Her Larry being perfect. Just add a descriptor after the colon and go with it. That is very, very smart branding of one's product, in this case the singer's bright, voluptuous and fun voice and her intelligent and informed sense of humor.

However, said sense of humor can be a pitfall. If an artist comes off too cute, he or she runs the risk of not being taken seriously or, even worse, dramatically reducing the breadth of his or her appeal. Lebo avoids this through sheer talent. Claiming that her professional life really had no plan, there is a definite thread that binds her three extant recordings together. Sometimes a natural evolution is all that is necessary to achieve something special and Lebo is enjoying such an evolution.

In his landmark survey of the great classical music figures, Lives of the Great Composers (W.W. Norton, 1997, Third Edition), Harold Schonberg titled his chapter on Johannes Brahms, "Keeper of the Flame." He did so to highlight Brahms' abiding respect for his predecessor Beethoven, choosing to expand that master's language horizontally rather than further aid the music's full-blown vertical development into the Romantic as advocated by Richard Wagner. This is what Lebo aims to do with the masters of American music.

Using another classical music allusion, Lebo is like Felix Mendelssohn, who, in 1829, resurrected the music of Johann Sebastian Bach in the guise of Bach's Matthäus-Passion (St. Matthew's Passion), giving the first performance of the piece since the composer's death 70 years prior. Lebo is very much a keeper of the flame, but not simply that. She intends, in the evolution of her art, to reunite the unique American vernacular to the music America gave birth to, the blues, jazz, American folk and western swing. Her journey doing so is both compelling and fun as heck. 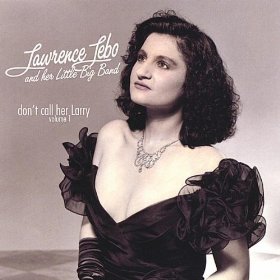 The first installment of Don't Call Her Larry, Lawrence Lebo and her Little Big Band, is a teaser. It is an EP boasting just enough music (four songs) to generate interest. The same approach was used recently by Kristen Porter on her EP, By The Light of the Mood (Self Produced, 2010) with impressive success. This Lebo offering from 2004 provides all the information needed to embrace the character that is the singer.

Lebo introduces herself with the blues "On Time." This song may well be Lebo's theme song, occurring here in her Little Big Band splendor and then completely stripped down on Don't Call Her Larry, Volume 3: American Roots. Little Big Band may be a bit misleading because of the total absence of reeds and horns, Lebo opting instead for strings, the violin being a thread through all of her recordings. Add virtuoso banjo and mandolin and the band picture is complete. Lebo and band achieve a grand recreation of original western swing of the Midwest in the 1920s and 1930s, the country and western equivalent of big band jazz of the period.

Lebo's blues sensibility is completely intact as evidenced on "On Time" and the closer, Koko Taylor's "Please Don't Dog Me." She is sexy without being salacious, a tease willing to make good if good is what she gets. When Lebo sings, "The man who is careless, doesn't work hard / He'll never get employment, not in my shipping yard," you know she means business, generating not just a little interest in that "shipping yard." Instrumentally, the standout performances are the angular banjo solos by Pat Cloud, who outdoes Bela Fleck at his own serious game with humor and confidence.

The two middle tunes, the Arlen/Mercer "Accent-u-ate the Positive" and Louis Armstrong's "I Want A Butter and Egg Man" (both reprised on Don't Call Her Larry, Volume 2) are period pieces delivered with an intelligent wink and nod to both the past a future. Lebo's voice possesses the necessary peculiarity to make it both interesting and compelling. This brief whiff of a disc presents plenty of evidence that more Lebo need be heard. 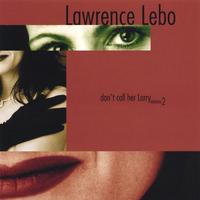 The opening "Was That Love" almost sounds as if Lebo is going standard and producing just one more jazz recording. John Nau's piano is quite fine but where are those cool strings from the first recording. Well, Lebo doesn't hold out long before delivering. "You're My Thrill" features David Strother's sharp violin and Cheryl Saunder's perfectly placed acoustic guitar. No Django Reinhardt here, Saunder's playing is all American Eddie Lang shot into the 21st century. Lebo's own "It's not the First Time" is a swing blues acoustically propelled by husband/bassist Denny Croy and Saunders, seasoned with Strother's piquant Joe Venuti fiddle.

"I Want A Butter and Egg Man" reappears in a delightfully stripped down fashion that swings more freely than Lebo's previous interpretation, again because of the Croy/Saunders/Strother triumvirate. The antique remains with the song, but is well dusted off. The same effect is effected on a second rendition of "Accent-u-ate the Positive" where Croy, Saunders, Strother, and Lebo are sonically well separated in a scrubbed clean treatment of the song. Lebo serves Patsy Cline well with a boffo- splendid "Walking After Midnight." Again, performed as a trio backing the singer, Lebo establishes a "less is more" direction for her performance compared with Volume 1.

Lebo betrays her scat chops by introducing the sacred jazz relic "How High The Moon" with saxophonist Charlie Parker's famous re-imagining of the tune, "Ornithology." Lebo interpolates "Somewhere Over the Rainbow" deftly into the song in an arrangement that is simply over the top. There is a definite trend occurring between the first two volumes of Don't Call Her Larry, tending toward simpler, more spacious arrangements that retain the light, swinging momentum of larger bands.

But Lebo is not done yet. She closes Volume 2 with searing electric blues replete with horns and Nick Kirgo's slashing electric guitar. "(I'm Your) Christmas Present, Baby" is seriously sexy and a great indication of Lebo's original writing. The disc ends with a stomping "It's Not The First Time" that offers the a brilliant schizophrenic/creative juxtaposition of the two visions of the singer. Bravo! 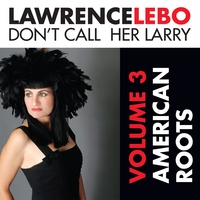 Save for the concluding two songs on Don't Call Her Larry, Volume 2, Lebo has been heading in a reductionist direction musically. On Don't Call Her Larry, Volume 3: American Roots she reaches minimalist nirvana with Denny Croy providing full-toned, perfect-time bass strumming. The subtitle shows a systematic approach Lebo takes toward presenting American music, specifically the blues, jazz, folk, and western swing, all color-coded on the jewel case back. She is a modern JS Bach, a musical taxonomist defining the genera of American music.

Lebo begins with the blues (though she classifies this as "jazz"), reprising "On Time" from Volume 1. The song here is a much different animal that on Volume 1. Lebo's blues singing is perfectly presented and Croy's bass is in tune with it. The pair achieve the same with a third performance of Lebo's "It's Not The First Time." While keeping the proceedings small, Lebo does expand things on her western swing tunes, "Cowboy Swinging Boogie Woogie" and "A Promise I Can Keep" with the inclusion of Rick Cuna's lap steel guitar and Mike Acosta's saxophones on the former, and Tony Mandraccia's guitar and Graig Fundyga's vibes on the latter.

Lebo does present standard jazz in Sammy Cahn's "I Should Care." Again, with Croy's bass as the only instrument save for Lebo's voice, the singer present the skeleton of the Great American Songbook, unadorned and that much more beautiful for it. She accomplishes the same with the reinterpretation of her own "Was That Love" from Volume 2. Lebo is at once establishing her book with songs that can endure multiple interpretations all that are creative and revealing. Her's is a talent fully realized, yet continuing to evolve in surprising ways. Please honor us with more, Lawrence Lebo.

Visit Lawrence Lebo on the web.

Tracks: On Time; Ac-cent-tchu-ate the Positive; I Want A Big Butter and Egg Man; Please Don't Dog Me.

Tracks: On Time; Cowboy Swinging Boogie Woogie; It's Not the First Time; Rose, Rose; Lawrence's Working Girl Blues; Was That Love; Walking the Back Streets; I Should Care; A Promise That I Can Keep.