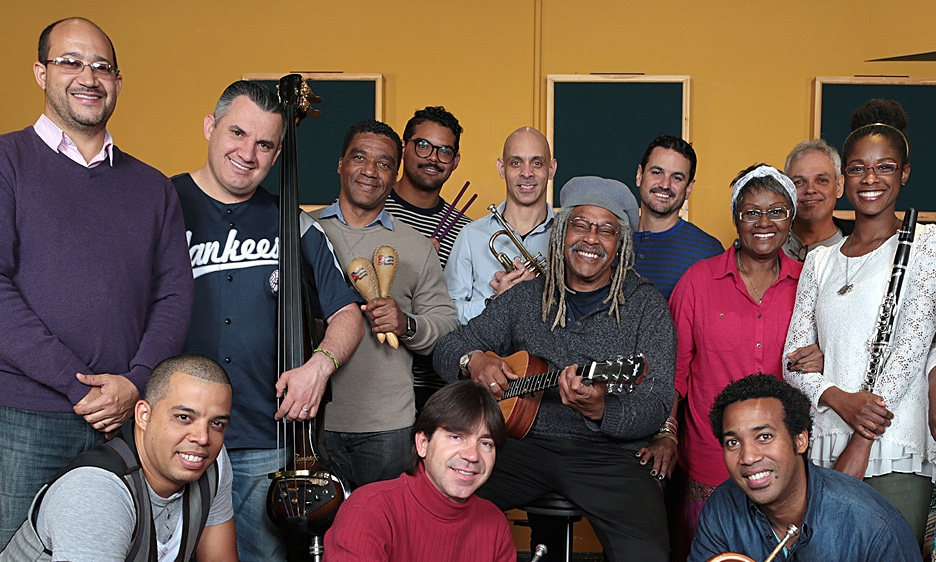 Juan De Marcos and his Afro-Cuban All-Stars returned to the Miner Auditorium of the SFJAZZ Center for the first time since the outbreak of the COVID-19 Virus.  Previously, his two daughters—clarinetist Laura and vibraphonist Gliceria were band members, but due to necessary Covid re-alignments, they could not attend.

Sporting a dark lavender beret atop his lengthy dreadlocks, bespectacled and wearing a smooth grey suit, De Marcos is distinct in appearance. Guiro in hand, he commanded his formidable ten-piece band, to which were added two fine vocalists—Emilio Suárez and the animated, gifted vocalist Alberto Alberto (sic).  The complete list of these killer musicians can be found below.

De Marcos is a welcoming and eloquent orator who easily engages with his audience, providing background about his life, his band, and his music.  Early in the set, he paid a musical tribute to his co-creator of the Buena Vista Social Club, Rubén Gonzalez. The next tune, "Guajiro," featured an "off-the-hook" solo by pianist Orlando Cardoso. It ended with him doing a glissando with hands dropping off the edge of the keyboard and his body comedically following suit. Next came an unnamed song attributed to De Marcos' collaboration with Lin-Manuel Miranda and Gloria Estefan.

The audience quickly rose to its feet when the group next played the great Arsenio Rodriguez's classic, "Dundunbansa," with De Marcos paying tribute by manning a Cuban Tres—three-string guitar.  The two vocalists were spectacular.  Emilio Suárez, in addition to his singing and good looks, is quite the Mambo and Rumba dancer.

Tunes in the set ranged through many classic Cuban rhythms—Son Montuno, Mambo, Rumba, Danzón, Bolero and even a modern Timba-style beat made for dancing, for which De Marcos invited the audience to dance.

After the final tune and the band had left the stage, the audience roared for an encore—"Otra! Otra!"—and the musicians were only too happy to oblige.  During the unnamed encore, pianist Cardozo leaped up from his piano stool and slew the audience by performing the ceremonial dance and movements of Eleggúa, the Yoruba Orishá of the crossroads—associated with Jesus—where heaven meets earth. Audience members went wild as they witnessed this dazzling display. The musicians left the audience clamoring for more as they made their final exit. Otra! Otra!