By Dan Bilawsky
February 26, 2013
Sign in to view read count 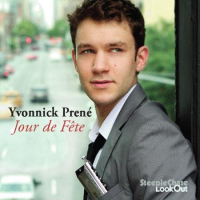 European jazz harmonica players aren't exactly a dime a dozen, but the Old Continent has birthed a few for the ages. Belgium gave unto jazz the legendary Toots Thielemans, Germany put forth vibes/harmonica doubling sensation Hendrik Meurkens, and the Swiss turned out Gregoire Maret; now, the French weigh in with the young Yvonnick Prene.

Jour De Fete marks Prene's debut and it proves to be an excellent showcase for his writing and playing. He readily identifies Thielemans, Maret and Stevie Wonder as inspirations and influences, and he's clearly tapped into their work to feed and fuel his own musical imagination. A breezy, devil may care attitude which connects to a good deal of Theilemans' oeuvre comes through in oft-played pieces like "Con Alma" and "Nobody Else But Me," but that only paints a partial picture of Prene's personality. Low intensity funk comes to the fore on "A Billion Stars," which features snippets of spoken word recordings featuring science fiction writer Ray Bradbury's voice, and light-yet-propulsive swing-to-Latin rhythms take hold during saxophonist John Coltrane's "Satellite," which opens on some playful dialogue between Prene and guitarist Isaac Darche.

Classic tunes are peppered throughout the program, but the lion's share of the material comes from Prene's pen. He visits in on a variety of musical areas in his writing, but his instrumental voice remains remarkably consistent throughout. "Escale" bears a Brazilian beauty mark, "As Night Falls" shows off Prene's predilection for lyrical lines, and "Home" hits the heart head-on; this uplifting number proves to be the most memorable original of the bunch.

These days, Prene calls Brooklyn, New York his home, but the spirit of Gay Paree still lives within his highly agreeable music. Jour De Fete is his recorded initiation into the fraternal order of jazz harmonica aces; he's now a part of the club for life.