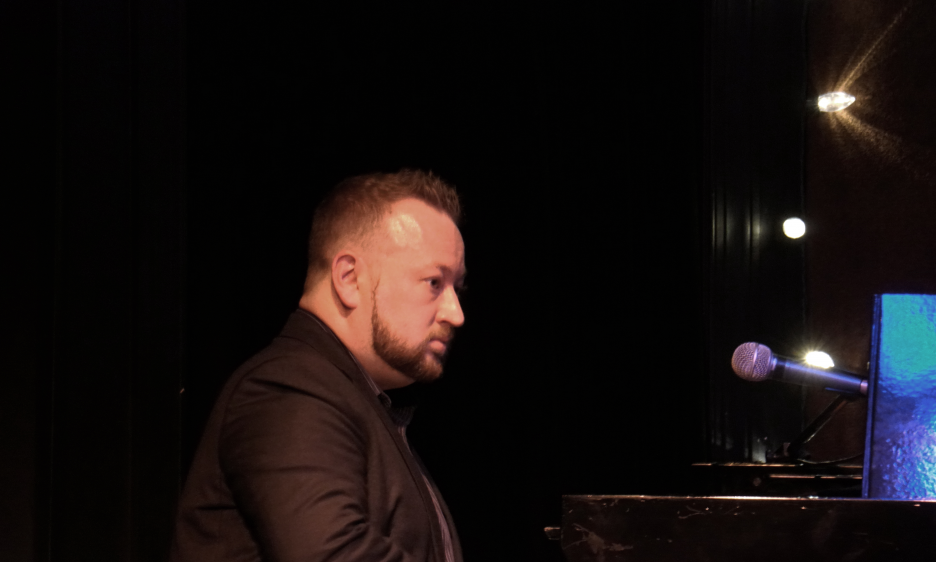 As an introduction to his version of "For All We Know," Joshua Bowlus read out the lyrics while clicking his fingers loudly to lead the trio into a slow version of the 1934 tune. "For all we know/ We may never meet again/Before you go/ Make this moment sweet again/ We won't say goodnight/Until the last minute/ I'll hold out my hand /And my heart will be in it."

In the break, bassist Billy Thornton remembered hours spent hashing out music with Bowlus in practice rooms at the North Florida University jazz program. Bowlus is an intense, concentrated player who studied with Kevin Bales and now regularly escapes his other dimension in the financial world to return to the music. Together with Quentin E. Baxter on his wood-rimmed drums, the trio felt their way through the music, foraging for a solo. At times they paused, as if waiting for a way forward, then they were led on again by one or another into a high energy section.

They ended the first set with a jam session favorite, Cole Porter's "Love for Sale." The second set opened up with a Ray Brown trio piece from the Walk On album called "FSR," which is code to mean For Sonny Rollins. On to the Charlie Chaplin tears of a clown classic "Smile," which was carefully done with great sensitivity.

In his performance, Bowlus repeated devices like a trill high on the right hand while delivering the melody with the left, reaching into the piano to mute strings and attacking fast sections with enough energy to bounce him on the bench. In "We'll be together" Thornton worked a full, deep and mellow bowed bass section into his solo. Baxter took a long tour around his drum kit in a captivating solo of excellence, switching on and off the beat. He held the audience spellbound then delivered them back to the tune almost as a surprise. They recovered with a burst of applause.

The interplay between the three was intriguing. At the end of one piece Baxter was applauding the other two members of the trio, along with the audience. They were challenging each other with looks and smiling at the results in this top quality tour de force, housed in the classic trio format.