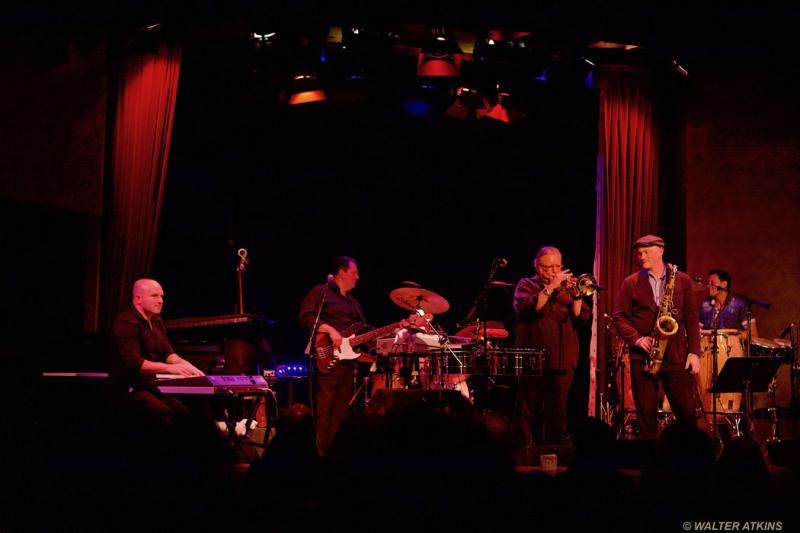 Ten time Grammy winner Arturo Sandoval and his splendid band provided a memorable Saturday evening in one of the East Bay's favorite music venues, Yoshi's Oakland. The Afro Cuban jazz trumpeter's sold out second show was part of a bustling three night stand coming just in time for some pre Thanksgiving Day weekend celebrations. Fortunately, the smoggy air from the massive Camp Fire in Paradise, CA did not dampen the spirits of Sandoval's supporters.

Sandoval the husband, knew how to talk and engage his audience with his brand of humor. After 44 years of marriage, he had to be careful about what he said around his wife with no swearing. According to him, his lovely life partner was Cuban but, ..."She must be German-she's very strict." The band leader then introduced his stage mates. The Emmy award winner's capable group consisted of: Sandoval on trumpet, timpani, vocals, and piano; Mike Tucker, sax; Tiki Pasillas, percussion and vocals; Johnny Friday, drums; John Belzaguy, bass; and Max Haymer, piano. The night cap set list included "My Romance," "Bye-Bye Blackbird," "Soca Beat," "All The Things You Are," "When I Fall In Love," and the funky extensive encore "The Peanut Vendor."

After finishing the opener "My Romance," Sandoval talked about the importance of "playing" as opposed to "working." "We play and have fun playing." He slyly added, ..."and if the audience likes it, OK." The upcoming song was the audience participation portion of the session. "You all know the words," he said with quiet confidence. The band moved into the Henderson/Dixon standard "Bye Bye Blackbird." "Don't be shy. Shy people have no fun," he stated matter of factly while playing the keyboards. Tucker's rambunctious sax solo contributed to the mix as the full band played with joyful gumption, producing a pleasingly warm sound. One of Sandoval's influences was the acclaimed trumpeter Clifford Brown, along with mentor and friend Dizzy Gillespie. His admiration for the eminent jazz virtuoso was also reflected by his energetic Gillespian vocalese style.

He freely talked about the different rhythms of music comparing the West Indies to Puerto Rico. "Completely different" he said. Sandoval and company smoothly flowed into the polyrhythmic "Soca Beat." The lively tune featured Sandoval on timpani and some more Gillespian vocalese.

Sandoval, a superb story teller, mentioned his early experiences in Florida. On his first visit to Miami, he practiced speaking "proper English" with people until he realized, "No one speaks English in Miami." He talked about his childhood growing up in a Cuban village (Artemisa), and how the piano was always his first love. However at that time, boys who played that particular instrument were the subject of neighbors' unflattering comments. They wondered what was wrong with them. "I was the victim of this misconception." That's why he picked up the trumpet and the music world is glad he did. He added a famous trumpeter told him when you open up the trumpet case, "it gives you the middle finger." Another well known musician informed him, "The cold steel has no love." He then went to the piano bench for the next number adding casually, "I hope you like it, if not, your problem."

Walking through the packed house with a wireless microphone, Sandoval serenaded the captivated crowd with his rendition of "When I Fall In Love." All night, there were many guests nodding and moving to the music. One of them, Alex, offered some impressions of the six time Billboard Award winner. The listener admired his humility. "He's very comfortable in his own skin and he let's everyone shine. Everyone on stage is important. Some of my friends would have killed to be here tonight."

The rocking encore was the immensely successful "The Peanut Vendor"(El Manisero) by the Cuban composer, bandleader and pianist Moisés Simons. It had people on their feet and was the highlight of the show. According to web sources, the 1930 song was ..." arguably the most famous piece of music created by a Cuban musician. "The Peanut Vendor" has been recorded more than 160 times, sold over a million copies of the sheet music, and was the first million-selling 78 rpm single of Cuban music." In addition, "Because of its cultural importance, in 2005 "The Peanut Vendor" was included into the United States National Recording Registry by the National Recording Preservation Board." It was such a huge hit in its day, Stan Kenton's big band covered it twice, and Judy Garland sang part of it for the 1954 Warner Bros. remake of A Star is Born. Sandoval's novel interpretation incorporated the electric bass line from Weather Report's "Black Market" track to create a fresh update to the classic son- pregón (street vendor's cry). By this time, no one was sitting and Sandoval left the stage to a thunderous ovation.

Backstage, Sandoval and his wife talked with parental pride about their son, an artist. He would have a float in the upcoming Macy's Thanksgiving Day Parade. Marianela also shared a video of a happy cloud character on her iPhone. According to Sandoval, only six artists had been invited to enter a float in the 94 year history of the annual NYC holiday tradition. This was a marvelous close to an exciting evening of Afro Cuban music. The Sandovals were leaving early Monday morning for their 4 AM flight to New York. Unfortunately, the trumpeter was a little unhappy because they could not get a direct flight. The prospect of seeing their son's work on the national stage will make the trip worthwhile.