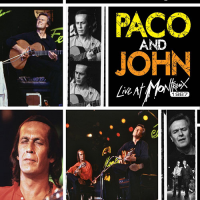 It's truly a shame that, all too often, artists with diverse careers become pigeon-holed, defined by the primary genre in which they first achieved notoriety. Take guitarist John McLaughlin, for instance. Ask most jazz fans about him and what will first come out of most of their mouths will include either the words "fusion," "jazz-rock" and/or Miles Davis, in any permutation/combination (not that there's anything wrong with that). Those a little further in the know might also be aware of his longstanding investigation into the nexus of eastern and western music with his Indo-collaboration, Shakti.

But while it may be true that McLaughlin first made a big name for himself through his raw, electrified work with Davis, Tony Williams and, ultimately, his own group, the groundbreaking, high-velocity, even higher-decibel Mahavishnu Orchestra—and continues to explore all things electric with his 4th Dimension band (now his longest-lasting band ever)—McLaughlin's career has always been considerably more expansive.

McLaughlin's first album as a leader, 1969's Extrapolation (Polydor), was an impressive first shot across the bow of the jazz world—an interpretive, explorative and, yes, extrapolative album of free-leaning post-bop. His second record was, a gritty, rock-intense quartet record, Devotion (Douglas, 1970), that took his work with Williams to the next level. His third release, My Goal's Beyond (Douglas, 1971), was an all-acoustic affair, with one side featuring McLaughlin alone (or overdubbed) on steel-string acoustic, performing a combination of jazz standards and original material; and a second side that featured a still-acoustic group that, with the inclusion of drummer Billy Cobham and violinist Jerry Goodman, may not have possessed Mahavishnu Orchestra's electrified intensity, raw energy or sheer improvisational power, but was still the place where the seeds for Mahavishnu Orchestra—and McLaughlin's love affair with Indian music—first began to germinate.

And that's just McLaughlin's first three albums. In a career now in its sixth decade and with nearly fifty albums as a leader or co-leader, the guitarist has done plenty, from nylon-string-with-embedded-synth guitar trios and tributes to Bill Evans in collaboration with a classical guitar quartet to cast-of-dozens collaborations like 1995's The Promise (Verve), and duos with artists including keyboardist Chick Corea...and, perhaps, McLaughlin at his most intimate, with the great and, sadly, late flamenco virtuoso, Paco De Lucia. While McLaughlin's collaborative trio with De Lucía and guitarist Al Di Meola was documented on three commercially released albums, the only place where McLaughlin's duo with de Lucía could previously be found was in the now out-of-print (and outrageously expensive) 17-CD box set, The Montreux Concerts (Warner Music, 2003), where the pair's 1987 performance at the world-renowned Swiss music festival can be found in its complete, two-disc, 92-minute glory (along with, on the final disc, a second performance, by the duo, of Brazilian guitarist/pianist Egberto Gismonti's "Frevo").

De Lucía passed away in 2014 at the too-young age of 66, so it's a fitting tribute to both the flamenco guitarist and the breadth of McLaughlin's ongoing career that Eagle Eye Media has seen fit to finally make this concert available on its own...and not just the two audio CDs, but a DVD as well, with the complete concert in full frame format (the assumption is that this is how it was originally filmed, considering its age), with Dolby Digital Stereo [24/48] and 5.1 Surround sound mixes. A brief liner from McLaughlin expresses his own appreciation at the release of this concert in both audio and video formats, but even more importantly about how important the energy of an enthusiastic audience can drive a performance to exhilarating, intoxicating highs...and how this was one such audience. It's not uncommon for musicians to enthuse about the importance of an appreciative audience, but it's rare for one to express this feeling with such generosity.

Today, McLaughlin is (thankfully) a still-healthy, still remarkably young-looking 74 year-old who continues to tour regularly with his 4th Dimension band, as well as participating in special projects like Corea's upcoming 75th birthday celebration series of shows with a group dubbed "Return to Forever Meets Mahavishnu," it's still good news that collaborations like Paco and John: Live at Montreux 1987 are seeing the light of day while at least one of the participants is still alive to appreciate it. In a performance that, in addition to a jazz standard, includes music by McLaughlin, Corea and Gismonti— as well as three tracks credited to "Francisco Gustavo / Sanchez Gomez," which is, in fact, de Lucía's real name—it's a program that clearly emphasizes the chemistry shared amongst the two guitarists. It's a chemistry that, in truth, is more evident here than in their trio with Di Meola, where it often became something of a cutting contest; instead, here, it's two players who clearly respect and appreciate each other, as much for their differences as their similarities.

With McLaughlin using a pick and de Lucía his fingers, there's an immediate, intrinsic difference in the two guitarists' sounds, making it easy to differentiate one from the other, even though the mix also places them precisely where they were onstage, with McLaughlin dominating the right channel and de Lucía the left (from the perspective of the listener; in reality, McLaughlin was on stage left and de Lucía, stage right): McLaughlin's tone sharper, more staccato, more attack; de Lucía's softer, warmer. Still, what's one of the set's most remarkable aspects is hearing both guitarists accomplish feats normally associated with the other. McLaughlin's inimitable accuracy with a plectrum, and hands that allow him to execute lines of blinding speed are, by this time in his career, no surprise; what is surprising—especially during his opening solo medley of his own "One Melody" and the Young/Washington standard "My Foolish Heart"—is how he manages to layer melodies, chords and bass lines with the kind of single-minded unity that requires most guitarists to use their hands (giving them five independent digits as opposed to one pick). De Lucía, on the other hand, is notable for his ability to match McLaughlin, high velocity line for high velocity line, despite using his fingers alone.

It might sound like the order of the day here is overt virtuosity and blinding pyrotechnics; nothing could be further from the truth. Yes, speed is, indeed, a definer here, with the camera work capturing each guitarist so that Paco and John can be as educational to watch for guitarists as it is entertaining for non-string slingers, who will witness the sheer joy these two players clearly share working together. But perhaps the single most important thing that this 92-minute performance demonstrates is a quality that fusion musicians are often (unfairly) dismissed as lacking: this is an extraordinarily melodic performance, both from the perspective of the material and how each player approaches it. McLaughlin and de Lucía may, indeed, perform at high speed...even on a gentle ballad like McLaughlin's "David"; but virtually everything each guitarist plays is filled with melodic content...it's just played at a speed faster than many.

But beauty can, indeed, be found in high-velocity music and both guitarists demonstrate this fundamental truth in spades throughout their nine-piece set, whether it's during Gismonti's joyful—and often-played—"Frevo," Corea's even more evergreen "Spain," de Lucía's propulsive, change-heavy "Sichia," where the two engage in some mischievous polyrhythmic interaction, or McLaughlin's knottier "Florianapolis," released the same month as this performance by McLaughlin's revamped Mahavishnu group on Adventures in Radioland (Relativity/Polygram, 1987), but here, delivered with no less energy and considerably more empathic interaction.

The connection shared by McLaughlin and de Lucía is not only evident visually, as each looks to the other while soloing or for a musical cue; it can be heard and, more importantly, felt in this wonderful set of music that may have structure at its foundation, but flows effortlessly, filled with a relentless sound of surprise to which many aspire but few achieve. It's especially notable in the closing look at McLaughlin's "Guardian Angel," where the two engage in some in-tandem improvisation that's all the more remarkable when—after a fugue-like passage where it feels as though it were one mind, not two, driving the music—the two come together in staggering unison.

With both the stereo and surround mixes new to this edition—and an improvement over the Complete Montreux box—it's true that the DVD may well be watched fewer times than the included two CDs are spun, but it remains inarguably the real draw of Paco and John. It's rare to hear two guitarists from such different disciplines come together with such mind-bending simpatico; the opportunity to actually see them do it, even rarer.

Beyond being instructional for aspiring guitarists, it's the clear ties that connect John McLaughlin and Paco de Lucía—in particular, on this very special evening—that makes Paco and John: Live at Montreux 1987 so welcome for fans of either (or both) guitarist; the overdue bringing of this powerful, passionate and eminently lyrical performance by two undisputed guitar virtuosos into general release. Given that so many of Montreux's performances have been recorded in both audio and video—and that McLaughlin, like Miles Davis, has received a "complete" box set treatment with all of his Montreux shows already available in audio, Paco and John: Live at Montreux 1987 also hints that there just might be more such sets from McLaughlin's many Montreux performances in the works...or, perhaps, a single, multi-disc video box set like Eagle Eye did with The Complete Miles Davis at Montreux (Columbia, 2002), released on DVD as Miles! The Definitive Miles Davis at Montreux DVD Collection (Eagle Eye, 2011).

In the meantime, whether or not more McLaughlin McLaughlin performances make it to video, Paco and John: Live at Montreux 1987 is a tremendous standalone set that may come as a surprise to any but the most ardent McLaughlin fans, who already know what performances like this demonstrate: that McLaughlin is far more than "just" a fusion guitarist; far more, even, than "just" a profoundly deep east-meets-west collaborator. No, McLaughlin is, quite simply, an artist; a guitarist who has, across his broad discography, demonstrated interest and capability in a broad array of styles and musical constellations, breaking down musical and cultural boundaries and building such a diverse career as to render him, at the end of the day, impossible to categorize. And as a final release for the late de Lucía, it's as potent an example of how, like McLaughlin, the flamenco master managed, in his life, to transcend purist concerns and go from "flamenco guitarist" to "guitarist," period.

If this turns out to be the final release for de Lucía, it's as perfect a swan song as the guitarist could want: an album that capitalizes on the intimacy of the duo with a fellow guitarist who may come from a different background but who ultimately finds plenty of common ground with this flamenco master; an album that demonstrates both guitarists' strengths in areas known and unknown to fans and casual acquaintances; and, at the end of the day, quite simply a staggeringly telepathic performance, filled with enough of the fiery, passionate and lyrically unexpected to render it a thrilling listen, spin after compelling spin.