By NENAD GEORGIEVSKI
December 6, 2013
Sign in to view read count 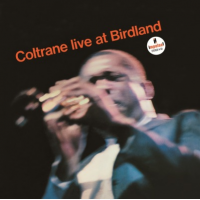 Historically important recordings by artists that are still celebrated today in most cases are those that have transcended the times they were made in. In those cases are seen more as milestones that mark their progress and advancement as artists. Such is the case with saxophonist John Coltrane where each record in his cannon indicates his progress, insatiable curiosity, zealous dedication and appetite for music. Consequently, this semi live recording Live at Birdland is another stop for him and his monumental Quartet in their progress towards new heights.

Recorded at the end of 1963 it is placed between the famed duet with singer Johnny Hartman that preceded it and the excellent Crescent (Impulse, 1964) with the Quartet that succeeded it. The 1960s were like a super highway for Coltrane's Quartet as they pursued new musical avenues and ways of expression, and as a result the music played was becoming more and more intense.

Prior to this record, drummer Elvin Jones had been hospitalized and absent for six months, and was replaced by Roy Haynes. His return marked a full flowering of this band's music which can be seen on subsequent recordings. But despite the title, only the first three tracks on this album were recorded live. The live energy is palpable throughout and the Quartet is in full flight from the word go as soon as Coltrane introduces the beautiful melody of Mongo Santamaria's "Afro Blue" with his warm yet sharp and distinct and assured tone on the soprano saxophone. The band provides a dynamic support and often sounds exuberant on this track with Jones, whose polyrhythmic style punches through the drums—heavy on his kick, but still dancing, while pianist McCoy Tyner shines both as an accompanist and as a soloist and Jimmy Garrison's bass lines serve as a propulsive glue that hold various disparate elements together in a gbeautiful whole.

"I Want to Talk about You" is a Billy Eckstine ballad that Coltrane first recorded for Soultrane (Prestige, 1958) and this ballad would be revisited many times during Coltrane's career. The opening lines are graceful and unrushed as Coltrane offers a rounded warmth in his tone, and regardless of the flurry of notes that he slowly unleashes the music still breathes. Midway, the music picks up the tempo and shuffles until five minutes in the set when the band suddenly stops and Coltrane proceeds to solo for three minutes unaccompanied.

"The Promise" resembles the playfulness and the flight of "Afro Blue" with Elvin Jones' rhythmic promptings resembling African tom-toms. The interplay between Tyner's piano, Garrison's bass and Jones' in mid song is astounding when the band takes a straight-ahead sprint and when Coltrane joins in with his right combination of adventurous solos on the soprano sax, he sounds garrulous, fierce and meteoric. Each musician is powerful enough on his own, but together, evidently, they are a juggernaut.

The remaining two tracks "Alabama" and "Your Lady" are studio efforts. Still, one cannot divorce the records from the times they were made. "Alabama" is a lament over the lives of four children that were killed in a bombing of a church in Birmingham, Alabama in 1963 as well as a civil rights statement for a right for equality. Coltrane's notes and the phrasing were based on the speech that Martin Luther King had given at the memorial service for the killed children. It is a mournful and gripping tune that is musically and emotionally staggering.

Anyway, this vinyl reissue gives more emphasis on audio quality, than on bonus cuts or rare tracks. The sound is superb and warm, and an effort has been made to replicate the original sleeves with the original liner notes by LeRoi Jones (or Amiri Baraka).

As time has shown, Coltrane's music is timeless and knowing that it was released 50 years ago doesn't date the effect or, more importantly, the music in the least. Live at Birdland is a transitory record, an overture to excellent achievements that will soon follow afterwards.

Afro Blue; I Want To Talk About You; The Promise; Alabama; Your Lady.