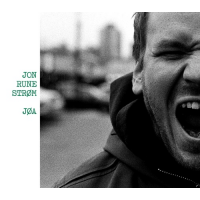 Strøm's debut Jøa, refers to his childhood home, an island in northwestern Norway, where he recorded the album. He applies his powerful and highly physical approach on nine free improvisations, each featuring a distinct temperament and aspect of his palette of sounds and inventive usage of extended techniques. He uses the bow as a means to extend and often to mess with, the rhythmic options of plucking the strings on "Ølhammeren." On "Seierstad," and "Bragstad" he sounds as if he's negotiating with the big instrument, attempting to submit it to the desired rhythmic discourse. The urgent "Tone fra Trøndelag" features a masterful usage of the bow to create an alternating series of drones and overtones. His physical approach reaches its climax on the intense "Geisnes," "Bragstad" and especially on "Fosnes," where he brilliantly uses the bow. On these improvisations he wrestles head-on with the double bass, with his body, all over the double bass until he and the massive instrument reach a common ground.

Other improvisations as "Faksdal" and "Folla" feature Strøm as a sensitive and emotional improviser. He harnesses his inventive vocabulary and extended techniques in the service of structuring dramatic narratives with surprising subtle shifts in the story, emphasizing the double bass' evocative deep tones and coloring it with exotic percussive sounds. The last improvisation, the heartfelt "Dokk må itj bannast," is dedicated to author Olav Duun, one of the outstanding writers in Norwegian literature, who was born on the island Jøa.