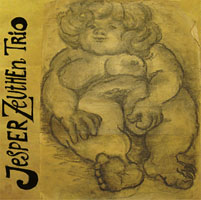 Bless the children of saxophonist Albert Ayler. Bless them, for their convictions are pure, and uncontaminated by convention and style.

That benediction should also be extended to Jesper Zeuthen. The sixty-something Danish alto saxophonist serves the same mission as the late, great Ayler on this trio session, with bassist Adam Pultz Melbye and drummer Thomas Præstegaard. Zeuthen is probably best known for his work with Pierre Dorge's New Jungle Orchestra, but he also played in the sixties Danish cult band Blue Sun, and sat in with trumpeter Don Cherry. Of late, he can be heard with guitarist Jakob Bro and in the trio WBZ, with Jonas Westergaard and Kasper Tranberg.

Playing with breathtaking vibrato, his invocation is an invitation on the opening "Solajma I Solen," with bass and drums playing follow-the-leader with his prayer. Like Ayler, the saxophonist favors an ecstatic delivery from an almost childlike and inhibited sound. Such is his approach, but don't call it primitive or unsophisticated, as Zeuthen also draws from Eastern "Synk Ej" and Middle-East sounds "Klokke" to finesse the sound.

Amid the swirling energies of bass and drum, Zeuthen's "Ukendt" trods along, trawling with his staccato notes, reaching ever upwards in exaltation. This rapturous sound is heard throughout. He plays part nursery rhyme and part Miles Davis "Back Seat Betty" on "Piru Tulee," and even runs through a Sonny Rollins calypso tribute with "Gnist."

Has the soul of Albert Ayler transmigrated in to the sound of Jesper Zeuthen? Absolutely.