By Troy Dostert
September 16, 2017
Sign in to view read count 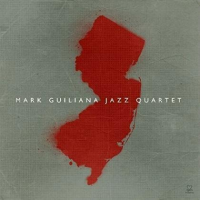 When it comes to the boundary-stretching spirit that has become so widespread among many of today's leading jazz musicians, drummer Mark Guiliana deserves credit for being one of the most enthusiastic embodiments of this attitude. He has a longstanding passion for electronic music, as heard especially on the releases on his own Beat Music label (2014's My Life Starts Now and Beat Music: The Los Angeles Improvisations). But his genuine love of rock must also be added to the equation: he was a crucial component of the musical synergy that galvanized David Bowie's Blackstar project, and he's not been shy about putting Nirvana/Foo Fighters drummer Dave Grohl on an equal plane with Tony Williams when identifying his most formative influences. And then of course there's Guiliana's prowess as a jazz drummer, revealed through his work with Donny McCaslin, Avishai Cohen, and Gretchen Parlato, not to mention his own recordings with the Mark Guiliana Jazz Quartet: 2015's Family First, as well as his current release, Jersey. Utilizing a standard, acoustic instrumental lineup, this group is as close as Guiliana gets to "conventional" jazz music. But it still bears the traces of his many other influences, allowing for an enticing amalgam to emerge organically and compellingly.

Guiliana's quartet includes colleagues he's worked with heavily over the years, especially tenor saxophonist Jason Rigby and bassist Chris Morrissey, both of whom were part of the quartet on Family First. The new addition is pianist Fabian Almazan, who has in his own way sought to transcend musical boundaries, most recently through his classically-inflected jazz suite Alcanza, released earlier this year. Together, the four possess the malleability necessary for Guiliana's skilled, creative compositions. Take for example the charged opener, "Inter-are," where Guiliana's shape-shifting drum patterns and Morrissey's pulsing bass lines, not to mention Almazan's palm-muted piano, propel a track that is both complex and infectious, with the addition of some flamenco hand-clapping at the end a terrific finish to a piece permeated with a spry, dancing energy. The players' jazz chops are displayed to fine effect throughout the record, with Rigby's searing solo on "Big Rig Jones" and Almazan's tenacious workout on "The Mayor of Rotterdam" being particularly memorable.

Superb musicianship aside, however, Guiliana clearly sees this recording as about much more than just an outlet for his band's technical abilities. Indeed, some of the most affecting tracks are the simplest: the ones in which he's able to draw from folk and pop musical forms. "Jersey," built around a repeated four-note bass figure and a lovely melody articulated with unadorned beauty by Rigby, is one of those songs that just grabs you and refuses to let go. The same goes for "BP," a song first recorded by pedal steel guitarist Rich Hinman, with a luminous lyrical core and yet enough room for the band to generate a strong groove behind it. And it's impossible not to be moved by the poignancy of "Where Are We Now?," a Bowie tune performed with heartfelt grace and warmth to close the record.

An album that's sure to have some staying power, Jersey is an excellent addition to Guiliana's rapidly-growing discography, and it's a testament to the expansive reach of his artistic vision.