By Doug Collette
September 17, 2017
Sign in to view read count 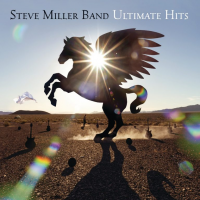 In the near fifty years since the release of his debut album Children of the Future (Capitol, 1968)-produced by Glyn Johns prior to his work with The Beatles, Rolling Stones 99, The Who and the Eagles-Steve Miller has issued his share of anthologies, including one by that very title. Compiled and produced by the artist himself, Ultimate Hits marks a return to his original label, longstanding home for his greatest success and may in fact live up to its name. It does contain all of Miller's most familiar songs among its forty tracks, available in a variety of formats, but this title also includes heretofore unreleased material that illustrates Steve Miller's talents as a bandleader and performer as much as a recording artist and songwriter.

Available in a range of digital and physical formats, the contents of all have remastered for an additional clarity of sound, a step that hasn't been taken with such a package of Steve Miller's since Box Set (Capitol, 1994). And while the sonic improvement is admittedly minor, it is nonetheless discernible in comparison to the most-recent such collection up to this point Young Hearts (Capitol, 2003). Impeccable audio has been a given with this man's records since The Joker (Capitol, 1973), however, so this extra technical step is perhaps more important as a harbinger of exhaustive efforts to come.

Nevertheless, Ultimate Hits somewhat belies that comprehensive approach, not to mention its very title, as the inaugural release in a new archive campaign devoted to Steve Miller's body of work. Tracklistings do not completely overlap from the single CD to its double deluxe counterpart and four LP's of vinyl (or digital format). For instance, "Harmony of the Spheres 2" only appears on the former version, but functions well as something of a sonic gateway into the dream sequence of nostalgia comprised of the hits, but also the snippet of recorded conversation between Steve Miller as a kid and recording pioneer and guitarist Les Paul. There are other variations too, but since this package is to be followed by expanded versions of Steve Miller's discography, presumably in toto, then what appear as exclusions now should eventually be rendered moot..

Hopefully including a greater array of period photos as appear in this booklet, plus a lengthier, but equally incisive essay (perhaps from San Francisco Bay Area writer Joel Selvin who wrote for the 2012 Edsel label reissues?), those virtually compel an overflow of additional unreleased material of comparable quality to that which populates this title. The self-deprecating intro to "Gangster of Love" takes as long as the rendition of the song itself, but it does serve the purpose of stipulating the overall significance of the blues as foundation of Steve Miller's (as do later tracks, including, but not limited, to a version of Elmore James' "Stranger Blues"). it's a point almost immediately reinforced with the quietly insinuating (latter-day?) version of early band mate Boz Scaggs' "Baby's Callin' Me Home."

As with those recordings that constitute the second wave of Miller's success, Fly Like An Eagle (Capitol, 1976) and Book of Dreams (Capitol, 1977) succeeded The Joker (Capitol, 1973), these concert cuts boast a pristine audio mix including sharp stereo separation. The quality of musicianship is a match (who plays harmonica though?)-almost too perfect for its own good in the vocal department-but then "Living in the USA" and "Space Cowboy" are excerpts from an ever-so-precise live presentation that, relative to stage production values, dates back to the ultra-professional rigor of Miller and his band as displayed at 1967's Monterey Pop. He shares the credit by virtually always using the assignation 'Steve Miller Band,' but he is nonetheless clearly an exacting frontman.

Such are the indirect means Ultimate Hits displays the various facets of Steve Miller's work. The implicit ethos extends to the solo demo of one of the man's most beautiful tunes: "Seasons" here demonstrates what a natural singer he's always been and, by extension, why vocals have always been such a prominent feature of his arrangements through the years. On a slightly different, but no less crucial front, this distinctly low-key take of "Take the Money and Run" hints at the repatriated Texan's expertise in the studio: it sounds far removed from the polished likes of the better known track, as does Wilson Pickett's "In the Midnight Hour."

The nonchalance of Miller's self-directed working methods is all too clear, and the end result frothy to be sure, but fun nonetheless. It's also indicative of how easy this man's made it sound to create his music, including but not limited to, his greatest commercial successes. But having this slightly over a half hour of previously-unreleased content juxtaposed on Ultimate Hits with the likes of "Jet Airliner" or "Swingtown" only brings out in sharper relief the virtues of the different recordings; A longer essay as incisive as the single introductory paragraph from Rolling Stone Magazine's Anthony DeCurtis would only amplify the effect, while more complete recording dates would add to a scholarship such retrospectives demand.

The striking graphics of this package is a variation on the Pegasus theme of a number of previous such releases, but its three-dimensional nature mirrors the added depth of the compilation itself. Though it may appear somewhat cautious as an initial foray into his vault, this Steve Miller collection nevertheless bodes well for what may be a treasure trove to see the light of day as bright as the sunshine glinting in the cover photo.