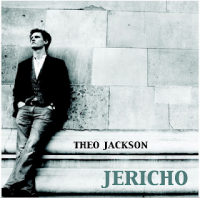 Singer, pianist and songwriter Theo Jackson lives in Oxford, of university fame, and his debut album Jericho is named after an area of the city rather than the ancient town that suffered so much from an excessively loud horn section. There's no need to fear excessively loud horns here: Jackson and his quartet build drama with more subtlety than that and engineer Derek Nash ensures that recording quality is high.

Jackson's voice is capable of the occasional bluesier, rougher edged tone but he stays mostly in the upper half of his range and at the softer, more romantic end of the spectrum—a Harry Connick, Jr. rather than a Dr John. Jackson has developed a reputation for performing a wide range of material live—including numbers from Charlie Parker, Oliver Nelson and John Coltrane—but he sticks with his own compositions (with lyrics co-written by Molly Hollman) on Jericho.

"Excuse Me" is a song in the musical theater tradition: the narrative of the lyric could readily serve to drive the plot of a boy-meets-girl storyline and Jackson's voice has an easy style and immediate likeability. "I Won't Care" is a mournful ballad on which Jackson plays some considered and spacious piano phrases. The tune also features Brandon Allen on tenor saxophone: his solo, accompanied solely by Jackson's piano, adds greatly to the mood of the song with just the right mix of romance and regret.

Jackson's musician's sensibility means that he's more than happy to give his fellow instrumentalists the chance to stretch out. Saxophonist Nathaniel Facey, from Empirical, grabs the chance wholeheartedly—his playing is exemplary, especially his tender solo on "Excuse Me" and his more up-tempo swing on "Moths." Guitarist Jamie McCredie spends much of his time as part of the excellent rhythm section with drummer Jason Reeve and American bassist Shane Allessio. When he moves to the forefront, on acoustic guitar for "You Saved Me" and "Another Day Of Rain" or electric for the soulful "Summer Sands," McCredie's lead playing is dynamic and perfectly judged.

While it's great to hear these musicians play, the tunes can stretch a little too far and lose the focus of Jackson's vocal: only "Summer Sands" comes in under five minutes. "Another Day Of Rain" and "Excuse Me" are beautiful songs but at between eight and ten minutes in length they're unlikely to get on many playlists. A pared-down "Excuse Me (Radio Edit)," for example, could attract the attention of a wider spectrum of programmers—assuming that's what Jackson wants.

Jericho is a welcome creation—the work of a young male vocalist who is steering a route that avoids the well-trodden paths of The Great American Songbook and heads towards a potentially fascinating musical destination.

Excuse Me; Fairytale; I Won't Care; Moths; Ballad Of A Broken Head; You Saved Me; Summer Sands; Another Day Of Rain; Tired.