By Joel Roberts
October 2, 2004
Sign in to view read count 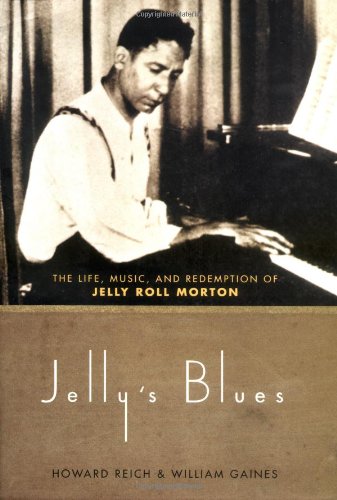 There are two heroes in Jelly's Blues. One, of course, is the book's subject, legendary early jazz composer and pianist Jelly Roll Morton. The other is an eccentric New Orleans collector of Morton memorabilia named William Russell, whose archives formed the basis for this radical rethinking of Morton's life and legacy.

Poring through the thousands of documents and letters in Russell's collection, stored for years in boxes and shopping bags in his French Quarter apartment, authors Reich and Gaines discovered a much different Jelly Roll Morton than the buffoonish character he has often been portrayed as. Instead of the charlatan and braggart who claimed he invented jazz, and then frittered away his talents to die in poverty and obscurity, Morton emerges as a musician of serious intent who continued composing in a distinctly modern vein long after his immense popularity of the '20s had faded. He's also credited as the first jazz artist to copyright his compositions, though that didn't help him recover the royalties owed him by publishers and record companies.

Equal parts detective story and jazz history, Jelly's Blues sets the record straight about one of the most vital, colorful and misunderstood figures in jazz - and one of many whom the music business used, profited from, and then abandoned. Jazz fans owe the authors, both veteran Chicago Tribune reporters, as well as the late Mr. Russell, a considerable debt of gratitude.