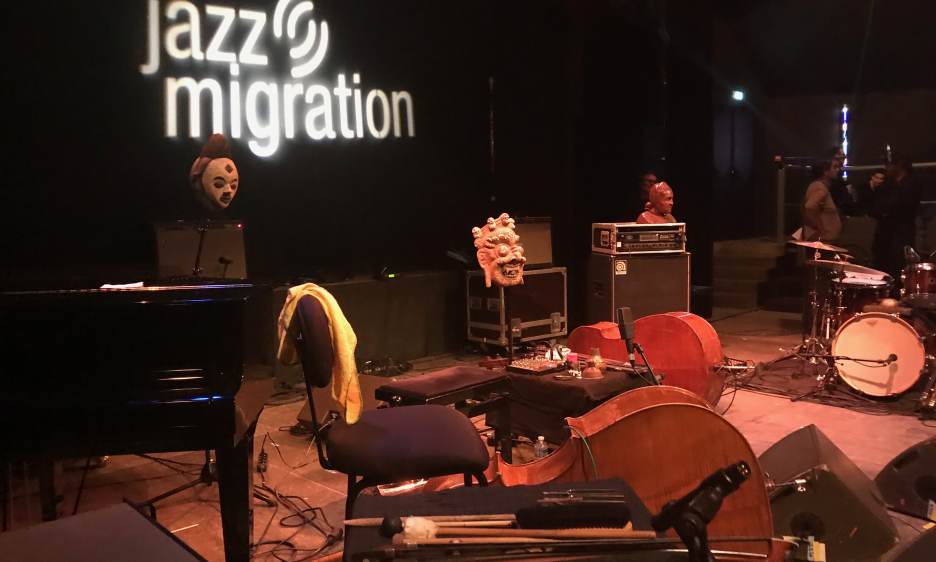 Jazz Migration started in 2002 to foster, accompany and support the professional career of selected young talent in jazz. Coaching is an important aspect of it and at the core stands the organization and procurement of concerts, nationally and internationally, for an annual selection of four groups of musicians. The four laureates are nominated through an election process opened to 100 promoters inside and outside AJC's network (clubs, festivals, nationals theatres, cultural centers). In addition, a French venue or festival adopts a laureate. The artists follow a training period with a 3-day residency in their sponsor's venue, theoretical training and meetings with professionals. In 2018, the four laureates were on tour in France and Europe for more than 80 gigs!

I already had the pleasure of experiencing two groups of last year's selection, namely Ikui Doki and Novembre, both at Jazzdor Berlin, and Novembre again at Jazztopad Festival in Wroclaw. Here is what I had to say about Ikui Doki appearance in Berlin:

"My personal favorites of this year were a wondrous sound unit of bassoon, harp and saxophone, a surprising and intense pointillist trumpet-piano-drums trinity and an octet with a special twisted charm, vitality and joy of playing the music.

The bassoon-saxophone-harp unit of Sophie Bernado, Hugues Mayot, Raffaelle Rinaudo, called Ikui Doki, was a marvelous affair, captivating not only because of its attractive sound, or the entanglement of their respective instruments and their splendid musical humor, but above all because of the way the three musicians went for, and into, their unfolding stories (for characteristics of some pieces see the slide show at the top of this article). I knew Sophie Bernado already from her strong contribution in several concerts with Eve Risser's great White Desert Orchestra (WDO) and harpist Rafaëlle Rinaudo from her daring duo with WDO bassist Fanny Lasfargues. It was a joy to see them joining forces with versatile reedist Hugues Mayot of the same generation and make something so strong out of it. Bernado is a sassy, imaginative improvising musician and Rinaudo knows the ropes, the rough and the tender, the stormy and the serene side. She used the vibrations of the strings and percussion on her instrument (and body) in a marvelous way. Saxophonist Hugues Mayot operated with great sensibility here in terms of tone and presence." (All About Jazz).

Novembre was playing Berlin too:

"Jazzdor's last night in Berlin started with Novembre, a new young French quartet consisting of saxophonist Antonin-Tri Hoang, pianist Romain Clerc- Renaud, bassist Thibault Cellier and drummer Elie Duris. The group was selected for this year's Jazz Migration program already mentioned above. Antonin Tri Hoang is a key musician of the younger French generation and already a familiar face for Jazzdor. He previously performed with Eve Risser's White Desert Orchestra and as part of German alto player Charlotte Greve's Liesbeth Quartet. Novembre had the same kind of free discursiveness as the Pablo Held trio and some of the polyvalent side of the music of Lüdemann's TEE ensemble, but the quartet gave it shape with higher pressure and sharp turns in a much more grinding manner. The group has developed its very own approach and voice of dynamic transitional diversity, of scraping and reformulation, which holds promising potential." (All About Jazz).

Then I saw Novembre again at Jazztopad Festival 2018 in Wroclaw playing in the Mleczarna Club. The music of these first rate musicians of the French young garde turned out to be a stunning squirreling affair of scorching dynamics and bold about-turns. In stop-and-go mode thereby hitting plenty hooks, accelerating, slowing down, it proceeded crossing and sliding into each other a diversity of rhythms, moods, melodic leads, textures and tempos. Every shred came brilliantly articulated and as a clearly felt part of a greater whole that was breathing the spirit and feel of Ornette Coleman—a kind of fluid mosaic antithesis to Peter Evans' Pulverize The Sound.

This year's selection of French Jazz Migration comprises four clearly distinguishable configurations beyond beaten tracks: a vocal-viola-drums trio shifting between dreamy shades and heavy rhythmic propulsion thereby creating a narrative of crossfading layers of (hyper)reality (Three Days of Forest); a piano-guitar-bass-drums-quartet gradually unfolding its lust gardens of reverberating sounds (House of Echo); a two-double-basses-trumpet-saxophone/bass- clarinet quartet conjuring up and transposing archaic hollers and ancient incantations (No Tongues); an accordion—euphonium—el. guitar—double bass—drums quintet of sassy, surprising turns of moods from serene introversion to sputtering explosiveness yielding an invigorating form of folklore imaginaire (Melusine). It is a selection that covers a broad range of refreshing diversity. Each unit beats its very own track through not yet densely inhabited musical landscapes thereby tempting our bolder imagination. The instrumentation of the groups is for a greater part non-standard and the musicians' inspirations range from European folk music, non-western ethnic music to minimal music, singer-songwriter music to free jazz. Each configuration connects in its own path to the musical past when conceiving its present way of expression.

Three Days of Forest is as jumpy and agitated as it is dreamy and fragmentary, rocking and floating. It is going back and forth between these "islands" of opposite modes. The music, somewhat crumbled and strangely remote, then again straightforward and proclamatory, sometimes reminds of Robert Wyatt. The trio, falling head over heels, on one side aggressively recites and shouts out lyrics and on the other side dwell in elegiac mode thereby inducing tension and expectation. Its recent work is inspired by and based on renowned Afro-American writers Rita Dove (1952) and Gwendolyn Brooks (1917-2000). Freedom of expression and its power in the struggle for human rights is a crucial point here. The trio's lo-fi rawness and versatility leave deeper traces over time. It is about here and now and a projected, imagined future. Three Days of Forest are Angela Flahault, vocals, Séverine Morfin, viola, Florian Satche, drums.

House of Echo is in a way the opposite of Three Days of Forest. The music unfolds as minimalist in a much slower pace with a profound depth in sound and gradually emerging climax yielded by condensation, increasing pace and rhythmic complexity. But that is only one side of this multi-faceted unit that works from slow expansion to explosion, from gently lapping waves to mightily engorging, thunderous floods. There is an opposite side too: whipped up by wild waters, driven by a maelstrom slowly passing into calmer areas. The music has characteristics similar to the dynamics you find in sudden weather change, the transitions between different aggregate states. House of Echo comprises Enzo Carniel, (prepared) piano, Marc Antoine Perrio, el. Guitar, Simon Tailleu, double bass, Ariel Tessier, drums.

The most far out, surprising, rushing and heaviest act was No Tongues with its line-up of two double basses and two horns. The musicians are inspired by archaic hollers, summoning shouts and incantations. They transpose those into mighty raw, rhythmically sharp-edged instrumental sounds. French group Vegan Dallas—although electro-acoustic—might be an association here. No Tongues consists of Ronan Prual, double bass, Ronan Courty, double bass + objects, Alan Regardin, trumpet + objects, Matthieu Prual, saxophones/bass clarinet. No Tongues had an impressive stage set-up with a collection of ancient masks speaking to the audience's imagination thereby increasing curiosity. The group also made the effort to clarify the inspiration/source of its music. Actually they operate on material coming from the famous Voices of the World Series (from the end of the 90s). The series comprises vocals of different categories from all over the world. No Tongues, among others, worked on the vocals of a French peasant spurring his oxen in plowing and on the throat-singing voices of two Inuit women.

As already said, the group transposed those into mighty raw, rhythmically sharp-edged instrumental sounds including samples of the original field recordings. The two basses are partly used like a Hungarian ütőgardon, a three-or four-string folk instrument looking like a cello but played percussively like a drum with a stick in order to produce sounds as intense and visceral as in the field recordings. The bassists—and the horn players too -have to apply intensively extended techniques and preparations here. In this re-contextualization those are mirrored at the ancient vocal expressions and suddenly get quite a different and remarkable significance. Or, as the group expresses it itself: the group "makes a dance with the past to illuminate the present."

The unit Melusine finally is really something of its own kind. On first hearing, it might seem reminiscent of durable French group L'Attirail. It has some characteristics in common but Melusine goes into different directions and depth of elaboration and variation. The quick surprising switches from serene and introvert to sputtering and explosive firing, from rushing to expanding and sustaining makes the pleasure of listening here. Melusine plays its very own continuous game of disintegration and resurrection of form, of constant layered variation. Disintegration, dissolution and resurrection take place consecutively, overlapping or even synchronously multi-layered. Construction and deconstruction are each other's appreciating partners here. Diverse versions dance around each other, top each other, clash, shake hands or undermine each other, all in cheerful stop and go and in lightning cooperation. Fragmented and danceable parts are connected in highly dynamic way. It is the ingenious counterpart to often praised seamless interlocking. The group is connected to and has traces of a rich diversity of forerunners; amongst others Led Zeppelin, Ennio Morricone, Rabih Abou-Khalil, Frank Zappa and even Naked City come to mind. Melusine is Anthony Caillet, euphonium, Stan Delannoy, drums/percussion, Christophe Girard, accordion/composition, William Rollin, el. guitar, Simon Tailleu, double bass.

In the music of all four configurations improvisational shaping plays a certain role but none is relying totally on extemporization, completely on real time open creation. That kind of music(making) seems to be excluded anyway from most jazz showcase events. It appeared that Jazz Migration again made a sharp, substantial selection. All four groups clearly advance(d) existing formats like jazz & spoken word/poetry, concepts like minimalism or application of extended and cut-up techniques to a considerable extent. Most remarkable is the meaningful contextualization of extended techniques by the group No Tongues. No Tongues' musicians lead/trace their musique instrumentale concrète back to archaic vocal musical expression, connect it directly to archaic sound qualities instead of creating it in abstracto. It functions as an important eye-/ear-opener giving some extra impact to the music. Something similar applies to the simultaneity/vicinity of deconstruction and resurrection in the music of Melusine that brings together/synthesize former antipoles in music making.

Considering the presentation to French and international promoters at Le Dynamo in Paris the Jazz Migration program apparently has beneficial and seminal consequences regarding the national and international touring of the chosen groups (80 gigs in the 2018 program) in a longer term perspective.