By Ian Patterson
December 14, 2018
Sign in to view read count 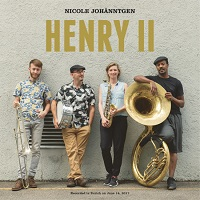 Two years on from Henry (Self-Produced, 2016), a pulsating set of contemporary tunes in the New Orleans brass band tradition, Nicole Johänntgen is once again bitten by the Nawlins bug on this vibrant follow-up. The Zurich-based German saxophonist is joined, as before, by trombonist Jon Ramm, drummer Paul Thibodeaux and sousaphone player Steven Glenn—their collective claws sharpened by two years of touring. It follows that the quartet's added road miles have deepened its intuitive language, resulting in music that fairly rips with rhythmic drive and improvisational panache.

Johänntgen's pen is almost as mighty as her alto saxophone, her eight originals laced with danceable rhythmic lines and meaty motifs. She also strikes a fine balance between collective cohesion and individual expression. Sousaphone solos may be rare currency in contemporary jazz but Glenn, who plays the anchor role, is also given plenty of stomping ground from the get-go, with an extended unaccompanied solo on the lively opener "I'm Feeling Dank." It's a thoughtful interlude in a tune characterized by Thibodeaux's snap and crackle, and the flare of Johänntgen and Ramm, who buzz around each other in heady flights.

The one non-original is Ray Parker Jnr.'s iconic "Ghostbusters." On paper it may seem like a million miles from Nawlins tradition, but the mining of popular music by contemporary brass acts like Hot 8 Brass Band and Soul Rebels Brass Band has taken New Orleans jazz to enthusiastic audiences around the world. It's no different really to the 1940s beboppers drawing from Broadway showtunes of the era for their launching pads. From a funky extended intro Glenn gradually teases out the famous riff, horns lock in unison and Thibodeaux injects second line pep. There are some terrific solos from Johänntgen, Ramm and Thibodeaux that bristle with first or second-take energy and, on cue, the musicians shout out "ghostbusters" with unselfconscious glee, as audiences surely will too.

There's a more overt New Orleans stamp—the title apart—on "Nachtspaziergang," a bluesy dirge marked by funereal drum. The mournful undercurrent is leavened, however, by soulful improvisations and lilting harmonies. Likewise, the blues spirit infuses "Sweet and Honest," another slow-cooking, seductive number. After some cut and thrust between the other horns Glenn's softly voiced closing solo, guided by brushes, casts a lulling spell. Muted trombone, growl and slide color the funk-fuelled "Tanzbär," which also stands out for its more spacious rhythmic feel. The quartet's rhythms, whether stomping or gently coursing are never less than infectious throughout.

There's greater zip in "Good Morning New Orleans," where riffing sousaphone and skipping drums help lift saxophone and trombone, Johänntgen and Ramm weaving playfully in and out of each other's slipstreams before aligning as one in harmonious resolution. Three-pronged harmonies color "Henry X," where Thibodaux struts his stuff with a rattling solo of festive brio. The cheery, celebratory romp "One More Piece of Chocolate" rounds out an uplifting set with Johänntgen once more delivery a fiery yet grooving solo.

The second instalment from Johänntgen's New Orleans band is even more rewarding than the first. With Henry II Johänntgen demonstrates that jazz can be, simultaneously, a seriously crafted, soulful and hugely entertaining business.