The Stanley Clarke Trio: Jazz In the Garden 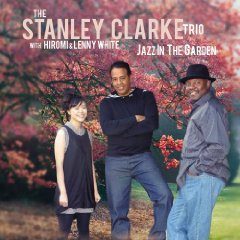 Is there a more prodigiously talented, but more annoyingly inconsistent artist than Stanley Clarke? A trip through the Clarke catalog reveals some brilliant masterpieces, many that are merely okay and a few that are bona fide turkeys. Doing things with an electric bass that no one else can, it's precisely because he is so good that he has to keep restlessly experimenting to prevent becoming bored.

Rather than being bored on Jazz in the Garden, Clarke is at the top of his game. Reunited with Return to Forever compatriot/drummer Lenny White, Clarke sounds invigorated as he steps away from the electric excursions that made him the gold standard for awe-struck admirers, going unplugged for a joyous return to acoustic bass.

Clarke can call on just about any pianist in the world to join his trio, but chose Japanese-born and Berklee-trained Hiromi Uehara to tickle the ivories. Those who have followed the growth of her career will know Hiromi is an unexpected but completely appropriate choice for the trio. No junior member, she more than holds her own with her two veteran partners.

Taking the rhythm section from one of the premier bands of jazz-fusion and pairing it with Hiromi—a hard-charger head-turner capable of straight-ahead, hard bop and wildly avant-garde with equal aplomb—suggests there's going to be fireworks. There are, but the simultaneous blend of traditional and modernistic is completely unexpected.

"Paradigm Shift (Election Day 2008)" is a shout-out to Barack Obama's victory. It may sound as though Clarke is playing electric bass at times, but he's not cheating. He's just so good that he's able to squeeze sounds from an acoustic bass that sound electric.

Hiromi contributes two originals—the beautiful "Sicilian Blue" and boppish "Brain Training," where White rides the cymbals while Clarke riffs along underneath her swinging piano. "Sakura Sakura" is a traditional Japanese ballad that gets an interesting rework.

"Global Tweak" is an improvised duet between Clarke and Hiromi and, despite their differences in age, culture (and height!), the artificial differences are swept away by two talented musicians just jamming and going where the music takes them.

Jazz in the Garden is an unexpected surprise that makes for superb listening. It is highly recommended, both for Clarke fans and those looking for a reason to become one.