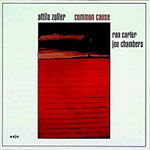 Among the legions of neglected jazz guitar players, the late Attila Zoller is one of the best. Enja's reissue of Common Cause presents all the evidence needed to make the case. Bassist Ron Carter and drummer Joe Chambers round out this fine trio recording, one that suggests a reassessment of Zoller is long overdue.

Zoller has a big sound oddly reminiscent of Charlie Christian. They were both guitarists who loved the sound of the electric guitar, producing big round notes that seem decisive and firm in a nearly physical way. But Zoller's music was the music of a later era, the post bebop era in jazz; and, besides, he was also familiar with 20th century classical music. His trio mates are just as sophisticated. In addition to featuring Zoller's trio, Common Cause includes two long solo guitar tracks, with seven of the disc's eight tracks original Zoller compositions.

Highlights of the session include the trio's performance of the title track, where Zoller and Carter carry on a long intertwined dialogue with Chambers providing understated but tight accompaniment to these two very articulate voices. Zoller's memorable, slightly mid-eastern sounding opening solo on "Tshitar" is joined at various points by Carter's bowed and pizzicato bass. Carter then echoes fragments of Zoller's solo phrasing before kicking the whole trio into high gear. Throughout, Chambers' precise and agile drumming guides the music from below, as the tempo rapidly shifts several times, and stylistically the music moves into a more modernistic vein.

" Lady Love" provides a graceful shift into a more traditional ballad melody, and a lushly romantic one at that. The deft versatility of these musicians is notable; there's not much these three instrumentalists can't do together, Zoller's two long solo tracks sustain the high level of musicianship throughout the session. The clear, sharp sound quality of the reissue adds to the pleasure of this subtle and highly recommended trio recording.