Dave Brubeck Quartet: Jazz at the College of the Pacific

By Keith Hatschek
December 24, 2021
Sign in to view read count 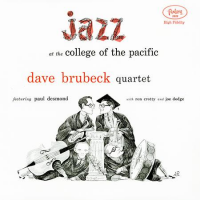 Time has done little to diminish the impact of this monumental live recording. The six selections showcase the Quartet's ability to weave melodic, rhythmic, and dynamic elements into a cohesive sound that is easily accessible to the casual listener while offering a depth of contrapuntal and thematic invention that merits repeated listening to the jazz aficionado.

The 1953 version of the Quartet was anchored by the smooth and swinging grooves established by drummer Joe Dodge and bassist Ron Crotty. Over this bed, the free-ranging flights of alto saxophonist Paul Desmond and Brubeck's own imaginative and singular improvisations would soar on that night in the Conservatory of Music Concert Hall. The original release featured six of the songs performed that night (due to the time limitations of 33 1/3 LPs) and while none of them were Brubeck originals, the enthusiastic response of the audience shows just how much the music connected with then-C.O.P. students.

That night's show was the third time since his return from military service that Brubeck had performed in concert at Pacific. All three of these early concerts were the result of Phi Mu Alpha Sinfonia, the men's music fraternity, raising the money to hire Brubeck's various groups and bring them back to campus. In 1948, his experimental Jazz Workshop Octet, formed in 1946, performed on campus, presenting their new and imaginative take on jazz standards, as well as some original pieces, all the while helping to establish a totally new direction in West Coast jazz, that would be followed by Miles Davis soon after with his own New York-based Nonet in 1949-50.

While the Octet provided inspiration to many, finding work that paid adequately for an eight-piece ensemble proved impossible, so Brubeck formed a trio, and in 1950 they were invited back to perform at C.O.P., for another sold-out show. In 1951, as Brubeck was recovering from his Hawaiian misadventure (he had been there performing with his trio which included drummer Cal Tjader and bassist Jack Weeks subbing for Ron Crotty who had been drafted), he wrote to Paul Desmond, who had played in Brubeck's Octet. He told Desmond he wished to start a Quartet with the alto player and a rhythm section, since Tjader and Weeks had been asked by Fantasy to start their own group, which would go on to success as the Cal Tjader Trio.

Thus, the earliest incarnation of the Dave Brubeck Quartet was formed out of necessity. With a few changes in the rhythm section, by 1953 they had hit their stride, as can be heard on the recording from Oberlin college. Veteran jazz record producer, Nick Phillips, explains why these college concerts were so ground-breaking at the time: "Brubeck's Jazz at the College of Pacific recording is both one of the most exciting and popular of his Fantasy Records-era albums—exciting for both the performances and the unbridled audience reaction to them. Along with Jazz at Oberlin, it was also pioneering: Presenting and recording jazz concerts at colleges simply wasn't done before Brubeck did it. And it inspired a generation of college students to get into jazz."

Hearing the album in 2021, the scintillating Brubeck-Desmond interplay at the end of "All the Things You Are" or the lyrical beauty suffused in the Quartet's moving rendition of "Laura" demonstrate how these masters of invention could take any musical idea and make it uniquely original and captivating. There really was musical magic being made that night in the C.O.P. concert hall.

The remaining eight songs captured during that night of the concert recording languished in the vault until 2002, when Fantasy Records released them as Jazz at C.O.P. Volume 2 . They may have been held back since they include a few of the arrangements featured on the earlier Oberlin LP. Dave Rickert, writing about the Volume 2 set for All About Jazz, noted:

"Desmond gets plenty of solo time, really digging into the changes while showing a sense of humor by injecting quotes from 'Santa Claus is Coming to Town' into 'Love Walked In.' At this point in time Brubeck was playing more rhythmically and forcefully than he ever would, and his Tatum meets Rachmaninoff style shows the origins of the exploratory work he would pursue later."

So to experience the whole night's performance, albeit out of order from the actual fourteen-song set list that night, you'll need to listen to both albums.

Meanwhile, Brubeck's legacy is in good hands. After twenty years under the stewardship of University of the Pacific in Stockton, CA, the Brubeck Collection has been relocated to the Wilton, CT Public Library, where a special room has been dedicated to house the extensive holdings found in the Brubeck Collection. Brubeck's children have established the Brubeck Living Legacy which honors the life and work of their parents, and a commitment to bettering the world around us, often using jazz as a point of connection and celebration.

It may have been more than a half century ago that this notable piece of jazz history went down in Stockton, CA, but the Quartet's music sounds as fresh and vibrant today as it did then.

All the Things You Are; Laura; Lullaby In Rhythm; I'll Never Smile Again; I Remember April; I Remember You.

Jazz-loving educator, author and lifelong student of music and the arts.