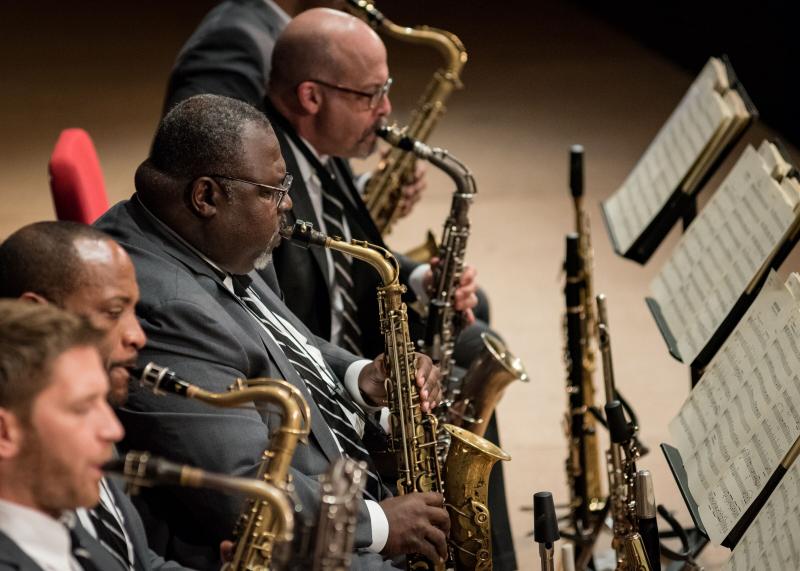 "One, two, one, two, three, and..." with the stomp of a foot, the buttery sounds of Wynton Marsalis' trumpet rolled through a 160 year old concert hall, filling the rectangular room with warm, lush tones. He thrusted the horn upward, ramming the music higher, then maneuvered the bell of his instrument toward the floor, the sounds becoming subdued and evasive. As soon as the notes he played dampened, the seated members of the Jazz at Lincoln Center Orchestra instinctively snatched up their horns and began to play "Offertory Part II, The Son."

The mission of Jazz at Lincoln Center is to entertain, enrich, and expand a global community for jazz through performance, education, and advocacy. Befittingly, Marsalis, serving as bandleader and emcee, told anecdotes between pieces and shared historical musings of musicians throughout the performance.

While introducing Duke Ellington's "Ad Lib on Nippon," Marsalis joked that Ellington "dressed the blues in its finest." Whole notes resonated from Carlos Henriquez's bass, on the composition's slow introduction. Dan Nimmer's lyrical run piano quickened the pace, and the music morphed towards eastern tones with a rhythmic shuffle.

Marsalis described Sherman Irby's arrangement of "Yes Sir, That's My Baby" as "one of our most swinging tunes." Dating back to the 1920s, the arrangement was stately and elegant, yet offered a hint of slippery swing. Plunger mutes muffled trumpets and trombones, tinging brass tones with wavering smears in a wall of orchestral sound.

Irby's saxophone was the main voice on "Big Fat Alice's Blues," a slow number from Duke Ellington's Concert in the Virgin Islands (Reprise, 1965). Irby's horn moaned, as notes twisted and careened against the band's smooth, spacious phrasings. At the tune's conclusion, a voice from the audience shouted "One more time!" In response, Marsalis delicately delivered the news that each piece would only be heard once during the performance to a round of laughs from the audience.

On "Two-Three's Adventure," Carlos Henriquez experimented with the clave, a rhythmic pattern common in Afro-Cuban music. Five saxophones blasted the main melody, while the remaining horn players clapped a beat. Lively and punchy, the music flowed, then suddenly wrenched on a hard swinging Caribbean feel. Marcus Printup stood and swayed, spraying the hall with a fiery trumpet solo. Thick, velvety sounds of the orchestra plunged forward, then fell silent for Henriquez's bass solo. Ali Jackson's drums kept time, as the bassist worked faster, climbing to the highest regions of the instrument. Short, repetitive notes rippled through the air, then a massive crash of horns returned for the final measures, bringing the piece to its close.

"Portrait of Louis Armstrong" opened with Marsalis' trumpet playing in flurries that left notes hanging, then quickly ushered resolve. Bolstered by piano, bass, and drums, notes fluttered and squealed. Trumpeter Kenny Rampton contributed a lengthy solo. "That was mostly improvisation," Marsalis explained to the audience after the piece's conclusion. "That was very different from the last time you soloed," he told Rampton, "and I want to commend you."

In a memorable performance, presented by Music Worcester at Mechanics Hall, the 15 soloists and ensemble players comprising the Jazz at Lincoln Center Orchestra connected today's audience with historic composers from the jazz idiom—safeguarding the sounds of jazz, and keeping the music alive for another generation of listeners.