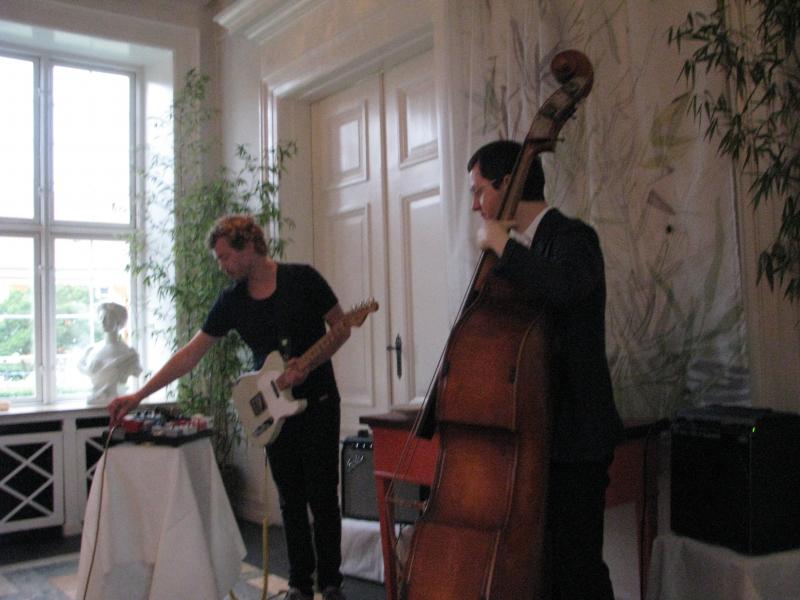 The Copenhagen Jazz Festival, with its more than 1,000 concerts in 10 days, spread over more than 100 venues and stages in all parts of the Danish capital, is like a musical monsoon cloudburst. The concerts range from big international stars to up-and-coming Danish artists and the avant-garde, reaching beyond common reception of jazz music. The festival also offers a wide range of admission-free concerts in cafés and squares, and brings together locals and tourists—young and old—with local and touring musicians. As a non-profit organization it is a communal affair that aims to serve the Danish jazz scene.

It was fortunate to just focus on two special events: one of them, A Culinary Tribute To The Art Of Improvisation, which took place at restaurant Mielcke & Hurtigkarl in the Copenhagen borough of Frederiksberg, next to the majestic baroque castle Frederiksberg, where the finest gourmet cuisine is served. Maybe it is not that amazing to get involved in something like this, in a city that has accommodated the best restaurant in the world for the past three years in succession. It is special in that extension to and combination with improvised music heard, and food created by improvisation. It was Danish guitarist Jakob Bro, American double bass-player Thomas Morgan and Danish Chef de Cuisine Jakob Mielcke who joined forces to put this into practice. 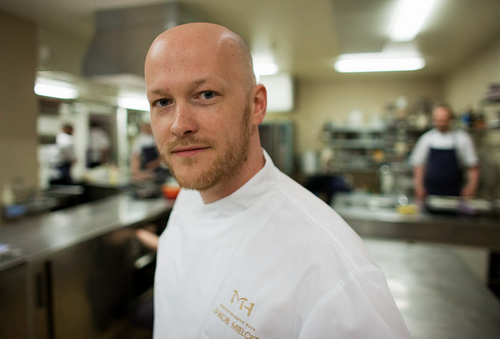 Bro is a member of Polish trumpeter Tomasz Stanko's Dark Eyes (ECM, 2009) quintet, has played in the bands of recently deceased drummer Paul Motian, and his own bands. He released the remarkable Time (Loveland Records, 2012) with alto saxophonist Lee Konitz, guitarist Bill Frisell and Thomas Morgan, preceded by Balladeering (Loveland Records, 2009), with Konitz, Frisell, Motian and bassist Ben Street. Morgan is one of the most in-demand bassists of the moment, already appearing on more than 60 albums. He has also played with Motian and various other combinations, such as saxophonists David Binney and Steve Coleman, pianists Sylvie Courvoisier and Masabumi Kikuchi, and trombonist Samuel Blaser. Jakob Mielcke has travelled the world and worked with masters including Pierre Gagnaire in London, and in his three-Michelin-starred restaurant in Paris. In 2008, he opened Mielcke & Hurtigkarl together with Jan Hurtigkarl—in the same place as the legendary old Gastronomique—where he now explores his creative vision. He was recently listed by Phaidon as one of the 100 most creative chefs in the world.

Mielcke worked with improvising musicians earlier. He was invited by the Danish jazz federation to prepare food during workshop and trainings. Bro also requested him to do workshops for musicians himself with his art of cooking. Some musicians were highly receptive to this experience others were reluctant. One of the highly receptives was Brazilian multi-instrumentalist Hermeto Pascoal who scribbled a spontaneous food-instigated composition on his napkin. Guitarist Marc Ribot commented that he was not keen on food that would taste as his music sounds. Drummer Andrew Cyrille got into the experience bit by bit and Thomas Morgan liked it. 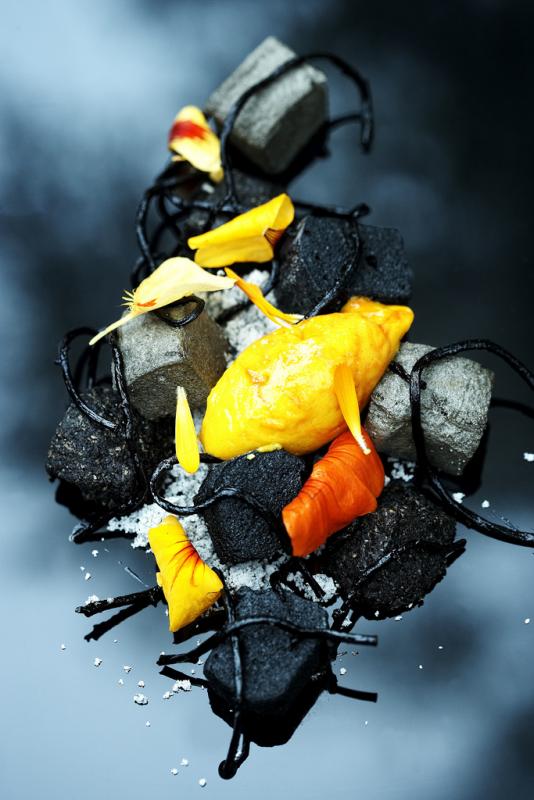 In that context, Mielcke prepared food visibly for the musicians, who reacted musically. For an audience sitting in the restaurant, the procedure of improvisation had to be adapted. Mielcke could no longer create food right in front of the musicians; he had to do it in the kitchen of the restaurant, in order to also serve it to his audience of about 70 people.

Mielcke had no prior knowledge of the ingredients with which he would work. His ingredients were provided to him the moment the performance started. So he spontaneously had to compose something unprepared in a very short time span, and then serve it to the musicians—his sidemen. He then let them react musically after tasting, and in the meantime served the delicatessen to the watching and listening audience. It was a completely new sensation to watch en goûtant-chewing musicians while listening to their music. 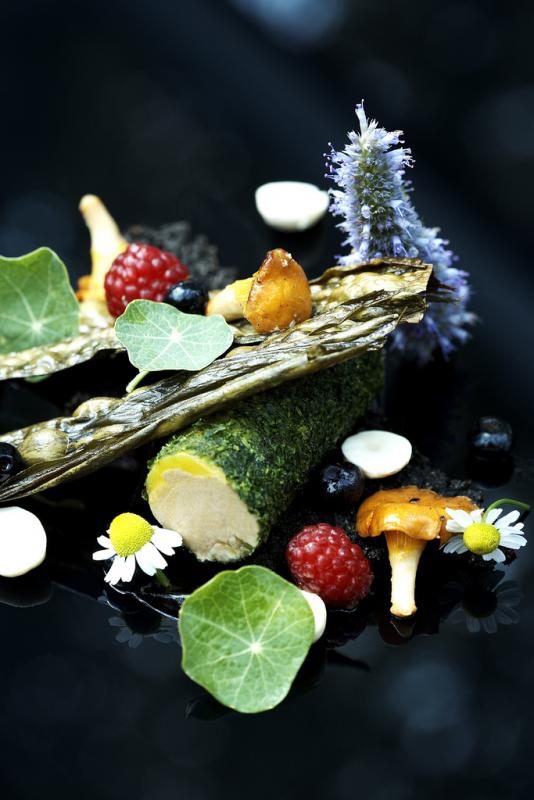 To this focus and this kind of reception, the audience started a bit uncomfortably, gradually opening up to the experience and becoming increasingly drawn in by the small but rich bits of bites and drinks. Eyes and mouth, hands, lips and tongue, nose and ears were stimulated more and more intensively: looking at the food creation—imagining the taste, then sensing and tasting it; experiencing the forces and feeling the effects. The heaviest sensations took place internally; it literally proved to be mind-blowing—increasingly so. It was not only the unfolding of the flavors of the actual piece of food or liquid, but just the composite of the succession, the flow and timing of the flavors: eating with your eyes, ears and mouth; listening with your tongue. Awareness of music and sound frequently lowered, smell and taste proved to be the strongest sensations. Concerning sound, flavor and taste, they all had one thing in common: delicate balancing was essential and irreproducible. It was fascinating and sense-sharpening to experience it in both dimensions and in interaction with each other.

Flavors and tastes draw us in and guide us—similar to sound—when we walk or stroll through our environment. We live by it. For Mielcke, this is an essential biographical experience. We had a stimulating discussion about the tastes and sounds of varieties of snow and ice and over his early attraction to the taste of beech-leaves in early spring. "An important characteristic of my cuisine is my obsession with nature. It is essential to me to pull as much organic wilderness as possible into my cuisine. By observing nature, the style of our food almost becomes self-evident. It is organic and playful—in the moment, always looking towards the future, respectful of the past."

Mielcke also emphasized the transitional and imaginative aspect of the creation and enjoyment of food. "Food is a way for me to communicate emotions and tell stories. To reach people and move them. It...only works when vulnerability is present. Taking people on a gastronomic journey around the palate and playing with the senses. The elements of nature in a series of organic impressions and tales transformed onto your plate." 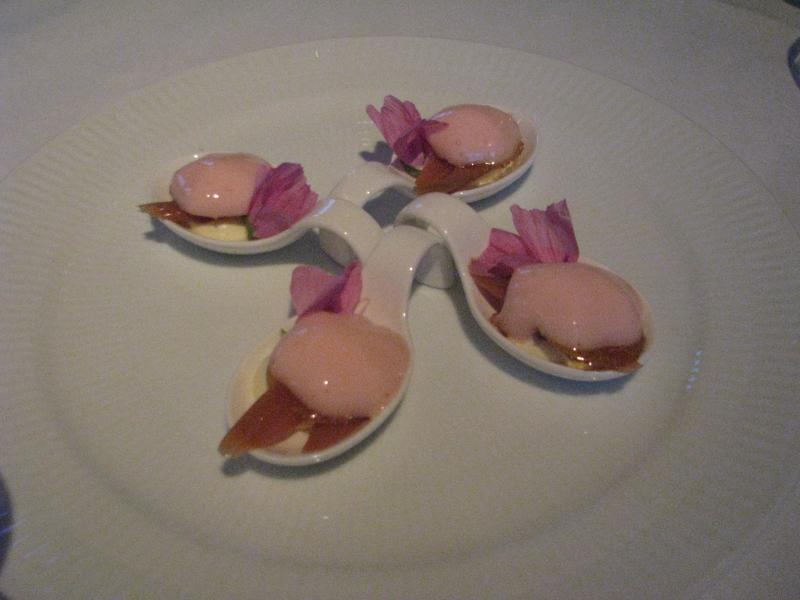 Both musicians were highly sensitive to these dimensions in their very own ways. Morgan demonstrated an extraordinary sense of the relativity and solidarity of sound and a special sensitivity of finding the right expression of it. Bro possessed a heightened sense of deep structure, the inherent powers of simple themes to unfold, and for the burning qualities of understated sounds. In that sense, all three performers relied confidently on (and experienced) the power of nature and their own shaping capacities. The effect of this palate-music lasted for hours, for days in the mouth and mind.