John Fifield: It Is What It Is

BY MATTHEW WARNOCK
September 19, 2010
Sign in to view read count 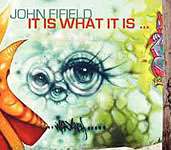 It is What It Is is an entertaining and exciting modern-jazz album from Florida based guitarist John Fifield. The album mixes modern harmony and feel with Latin and rock grooves in a manner that is a nod to those who have come before, while still keeping one eye firmly on the forward horizon. All of the players are sharp on this session, which only adds to the interest created by Fifield's well thought-out compositions and arrangements.

As a guitarist, Fifield has moments when he channels the likes of Pat Metheny; on "The Music Box," he shreds a la Allan Holdsworth and Frank Gambale; and he plays with an entirely personalized style on "July Rain (Reprise)." By mixing in recognizable material from some of the genres greats with his own unique approach to modern-jazz improvisation, Fifield succeeds in creating a listening space that is not completely interpreted or entirely abstract. His understanding of modern and traditional jazz harmony and melody are clearly evident, and the fact that he takes chances while interjecting his own voice into the music is as refreshing as it is entertaining.

The album also features memorable performances by bassist Ric Fierabracci, who channels the ghost of Jaco Pastorius on several tracks with his fretless bass work. As well, vibraphonist extraordinaire Joe Locke is brilliant on both the melody and improvised section of "Sophie." Knowing when to play and when to sit back and let the band dig in on the time, Locke's melodic interpretation and trading on the track are one of the album's highlights. Violinist Christian Howes is also superb throughout the record, contributing some top-notch soloing on tracks like "Ashtanga." Though the violin is often pushed aside in the jazz world, it is players such as Howes who prove, time and again, that the instrument, when played at this level, can compete melodically with any instrument in the genre.

Overall, Fifield's It Is What It Is is a noteworthy release: the tunes are craftily arranged; the improvisations range from sultry to blistering and everything in between; and the group dynamic is stellar. Though Fifield may not have the household name of a Metheny or Holdsworth, this album should go a long way to bringing wider recognition to a much deserving player.