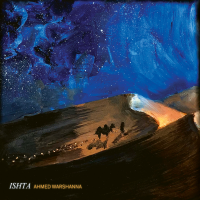 Maybe it's the underlying sound of Baltimore—the cry of nurses, the sirens rushing—that leavens his tone and tenor. Maybe it's the innocent in the shadow of a world that seems like it is closing in no matter how many walls one knocks down. Perhaps in real time retrospect, it's the genre-less style of his writing or the sly, collective voices of his septet, but Ahmed Warshanna's Istha is one of those debuts where you find yourself wanting more.

Dedicated to this mom's chemo struggle (yes there's the sound of that in his playing too), Istha is an elemental city narrative told by an aspiring apprentice seamster who makes all the fine stitching disappear. Raised in an Egyptian-American home, Eastern winds blow against and subside to Kenny Burrell's soft dialogue and Wayne Shorter's blues and all the quixotic worlds between.

Both serving as surprisingly intimate intros to Warshanna's roughly allusive, urban style, there's mystery afoot ("Inty Omry"), and there is intrigue ("Alf Leila"). Whereas as an almost-too-predictable (though comely) bout of cool ("Samaka") might derail the passive listener, it gives the rest of us elbow room to observe the whimsical "Azra" and the meandering, still oddly focused, "Intisar." Each a player in his own emerging, saxophonist Dominic Ellis, bassist Thomas Owens, trumpeter Hart Guonjiam-Pettit, trombonist Daniel Sperlein and drummer Charlie Seda generously make Warshanna's maiden voyage a good, true listen. Give it more than one.

For more of Warshanna solo and septet, see his Youtube link below