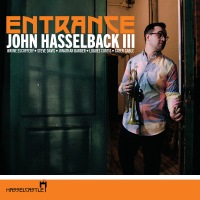 Entrance, New York-based trumpeter John Hasselback III's debut recording, is basically a quintet date on which Hasselback shares the front line on four tracks each with saxophonist Wayne Escoffery or trombonist Steve Davis. If one is known by the company he keeps, that's a rather persuasive frame of reference. Hasselback wrote every number save one, the standard "Body and Soul," showing from start to finish a keen ear for enticing bop-inspired melodies and rhythms. He plays as he writes, laying bare an affinity for such hard-blowing forebears as Freddie Hubbard, Lee Morgan, Donald Byrd, Blue Mitchell, Roy Hargrove and other legends on whose shoulders he stands.

Escoffery and Davis are on the same page, their sharp and earnest solos serving to keep Hasselback alert and eager to respond. The rhythm section is similarly compliant, with pianist Taber Gable providing yet another strong solo voice while bassist Luques Curtis and drummer Jonathan Barber keep excellent time. Hasselback's nimble trumpet enlivens the fast- moving opener, "B.F.G.," with Escoffery's muscular tenor riding shotgun, as he does on "Scarborough Street" and "Third Time's the Charm," switching to soprano on the warm-hearted "Rene's Way." Davis shares the front line on "Blood Orange," "Robert's Run," "Eclipse" and the closing "Kingsbridge." Hasselback's trumpet is muted on "Body and Soul," whose leisurely tempo is designed to wrest every ounce of emotion from its soulful theme.

Aside from that—and the meditative "Robert's Run"—it's basically full speed ahead in a session marked by its brightness, energy and unflagging interplay. Assessing the over-all design, one would expect no less from a musician owning Hasselback's pedigree: his grandfather, John Hasselback Sr., was a pianist, as is his mother, Lisa, while his father, John Hasselback Jr., is a trombonist. To say that music runs in the family would be an understatement. With Entrance, Hasselback has taken that heritage and run with it. While it will no doubt be interesting to see how much farther he runs, there can be no doubt that Hasselback has made a splendid move from the starting gate.