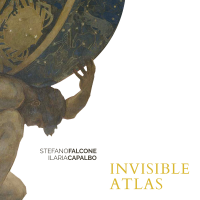 There is nothing more intimate in jazz than a duo. To be successful, musicians must be familiar, faithful, and comfortable with the chosen music and maybe more importantly, with each other. Such rapport is the theme of Invisible Atlas by two Neapolitan jazz musicians, pianist Stefano Falcone and bassist Ilaria Capalbo. Both have studied in Sweden and absorbed that certain Scandinavian jazz accent to accompany their Italian folk roots.

The eight tracks that make up this recording are an album in the true sense of the word. The opening "Prologue" and closing "Epilogue" bookend a mature collection of compositions by both musicians. The pieces are performed at the intersection of jazz and chamber works. Falcone's piano style is reminiscent of both John Lewis and Bill Evans; he maintains an air of majesty in his approach. Couple that with Capalbo's bass, which brings to mind Percy Heath and Eddie Gomez, and you might imagine the civility of this recording.

ADVERTISEMENT
The title track opens formally before the music cascades like rain into a melodious dance. Falcone and Capalbo are practiced at concomitant music making. Instead of a call-and-response here, we get two musicians present with each other's sound. Is "Vesuvius" a soundtrack to a movie about their home in Naples? If so, it is done with a nod to the lore and mythology that surrounds the beast that swallowed both Pompeii and Herculaneum. This is civilized and sympathetic music that is good for the soul.