By Ian Patterson
September 3, 2014
Sign in to view read count 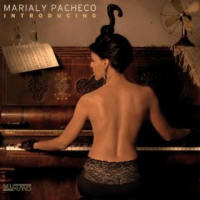 The album title is something of a misnomer as Introducing is Marialy Pacheco's seventh release as leader since Benediciones (Weltwunder Records, 2005). The Melbourne-based Cuban's stock has certainly risen since that introduction, notably as a result of becoming the first female winner of the Montreux Jazz Festival Solo Piano Competition in 2012. A noted classical pianist too, Pacheco has recited Bach with the Queensland Symphony Orchestra and guested with the Queensland Chamber Orchestra, the Camerata of St. John's. For her Neuklang debut Pacheco delves deep into her roots, dishing up evocative Cuban-inspired originals and fresh arrangements of old chestnuts.

Pacheco's three-part "Cuban Suite" provides the album's centerpiece. Clocking in at twenty minutes the three quite distinct components pay tribute to Cuba's traditional dance forms. Pacheco is at her most captivating on "Rumba," where her percussive accents, rhythmic momentum and constant motivic development—spiced by thrilling cadenzas—evoke a Havana version of Ahmad Jamal; the gentle "Danzón" is closer to a lullaby than a dance, with Pacheco sketching the faintest of melodies while Villa's electric bass softly sings; the spirit of John Coltrane's take on Mongo Santamaria's "Afro Blue" imbues Pacheco's passionate playing on "Conga"—a flowing trio discourse, full of drama.

Pacheco sings Felipe Rosario Goyco's "Madrigal" with the hushed, poetic intimacy of a Silvio Rodrigo ballad. Joo Kraus' delightful, muted trumpet phrasing is an album highlight, so too the tender and playful duologue between him and Pacheco that ensues. Kraus also shines on the evergreen "Tres Lindas Cubanas" as Pacheco—who recorded a lindissima version on Songs That I Love (Pinnacles Music, 2011)—lends quietly unobtrusive support, as though herself hypnotized by Kraus's spell.

"Metro" launches with surging intensity before Pacheco settles into a searching improvisation. Rhani Krija—who has performed with Ngyen Le, Sting and Vince Mendoza—brings an added rhythmic dimension, though it's Altamar whose flames leap highest in a vibrant solo over a Pacheco vamp. Krija's lightly dancing frame drums combine with Pacheco on the quietly mesmerizing duet "Cambodian Smiles"; at the song's end, the squeaks and squeals of children's laughter sound like exotic tropical birds.

Pacheco's strong pen, her imaginative handling of Cuban classics and her beguiling playing—with stellar support—make Introducing arguably her finest recording to date. Pacheco seems to have taken wings; surely it can't be long before the young Cuban star's introduction will be completely unnecessary.