The Swallow Quintet: Into the Woodwork 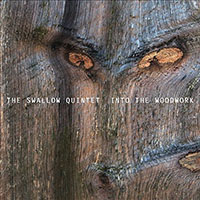 In the press sheet for Steve Swallow's Into the Woodwork, the award-winning electric bassist is quoted, saying: "Good humor before and after the red light goes on is very important. Music-making should be fun, after all." Those fortunate enough to see Swallow with Steve Kuhn and Joey Baron this past summer—including a memorable stop at the 2013 TD Ottawa Jazz Festival—experienced this ethos first-hand, as smiles and outright laughter defined a performance that was, indeed, great fun, but just as deep musically—the ultimate consequence of musicians so relaxed with each other that nothing can get in the way.

Into the Woodwork may lack the visuals, but it's clear that this quintet is having just as much fun, and is comfortable enough together to allow anything to happen—albeit within the structures of Swallow's writing. Other than life/music partner Carla Bley—focusing solely on organ and begging the question why she doesn't do so more often—this is a new constellation under the Swallow marquee, but guitarist Steve Cardenas and saxophonist Chris Cheek have intersected before, both with each other and with Swallow and Bley, in Paul Motian's Electric Bebop Band and Charlie Haden's Liberation Music Orchestra, respectively. Drummer Jorge Rossy—best-known for his decade-long tenure with Brad Mehldau—was a late addition, writing Swallow after hearing of the nascent quartet to ask if he might join in, and his melodic approach makes him the perfect choice to drive this book of 12 new Swallow compositions.

Swallow's has already achieved a place in the history books for memorable compositions like "Falling Grace," "Olhos del Gato" and "Como en Vietnam," but it's too early to tell if any of Into the Woodwork will join that rarefied group. Still, the through-composed, dark-hued "Sad Old Candle," vivacious title track, balladic "From Who It May Concern" and drum-heavy "Back in Action"—Rossy's call-and-response with the rest of the group occupying a full half of its five-minutes before a quirky, dissonant theme resolves into Cheek's fiery solo, driven by Swallow and Rossy's effortless, unrelenting swing—are individually memorable while, segued together as a 21-minute suite, contribute to Into the Woodwork greater continuity. The same approach links the blues-drenched "Grisly Business," brighter "Unnatural Causes" and ambling "The Butler Did It," before a brief pause leads into the album's closing tracks, joined together for 25 episodic minutes. In the midst of these five tunes, following Cardenas' warm-toned, melody-centric solo, "Still There" features Bley liberally—and mischievously—quoting the American folk song "I've Been Working on the Railroad" and the military "Taps."

That's just one example of Into the Woodwork's relentless spontaneity ... and good humor. The writing may be deep and the playing even deeper—Swallow's bass rarely feeling this rich or filled with ideas—but at its heart is a group that more than likely shares the same onstage smiles and laughter that Swallow did with Kuhn. It's been 13 years since Swallow last recorded with a full-sized quintet, but Into the Woodwork represents a new group and repertoire that easily stands amongst his best work in a career now entering its sixth decade.

Track Listing: Sad Old Candle; Into the Woodwork; From Whom It May Concern; Back in Action; Grisly Business; Unnatural Causes; The Butler Did It; Suitable for Framing; Small Comfort; Still There; Never Know; Exit Stage Left.