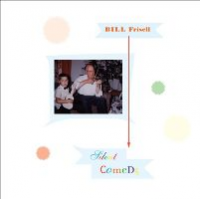 Only once before in a discography that runs to 35-odd albums has leader Bill Frisell released a solo guitar album—the brooding Ghost Town (Nonesuch Records, 2000). Thirteen years on, Frisell returns to the solo format, though the difference between the two offerings is like night and day. Whereas Ghost Town was a series of mostly acoustic compositions embellished with overdubs, Silent Comedy's real-time, loop-heavy electric improvisations employ no post-production. And, where Ghost Town was introspective and darkly poetic, Silent Comedy is restless, jagged and harsh at times. It represents, without a doubt, the most avant-garde experiment of Frisell's career.

All seems in place with the first notes of "Bagatelle," which are instantly recognizable as Frisell, and the loops that follow are well embedded in the guitarist's musical DNA. A little delay and pedal effects turn a single note into a gothic harmonium or accordion. It's an atmospheric and not atypical Frisell cinematic vignette. However, the frenetic Jimi Hendrix-like feedback of "John Goldfarb, Please Come In" suggests that Frisell got out of bed not only on the wrong side, but in a parallel universe.

Shards of motifs and islands of rhythmic pulse alternate with pools of silence. Single notes—clean, distorted, fleeting and sustained—mingle with swathes of reverb and delay, phrases like snatches of memory and a little sci-fi twiddling, for almost nine minutes. The intermittent chugging rhythm gathers momentum towards the end and creates the sensation of something foreboding looming, or perhaps receding into the distance, like Pathé comedy actors at film's end. The energy and drama, however skewed the montage, are unmistakable.

The dark-hued "Bobbitt" is a drifting sci-fi meditation though rarely has Frisell consistently eschewed melody, rhythm and traditional form to quite the degree he does here, and throughout Silent Comedy. That said, Frisell is as ever playing, only on this outing it's edgier, more abstract conceptually and more risqué than anything he's committed to record before. The title track is a fidgety miniature, with oblique suggestion of the cat-and-mouse humor that's a staple of black and white slapstick.

A wisp of a tune inhabits the power chords and searing distortion of "Lake Superior." This is Noise as though hijacked by guitarist Neil Young and filtered through Frisell's Americana prism. The altogether more sedate "Proof" follows a stuttering, stumbling logic all its own, and the seeds of a recognizable melody never quite germinate. Similarly, on "Leprechaun" Frisell pursues a scratchy, jittery course, where kernels of motifs are like little staging posts between abstract improvisations.

On more impressionistic numbers "The Road" and "Ice Cave," Frisell employs drone as a canvas over which he lays sparse colors—a floated chord here and there, or single notes resonating like little chimes. Within the skeletal structures of these numbers, devoid of overt pulse, there's an abiding sense of peace and reverie. Ambient numbers they may be, but they also serve up a little sonic respite from the dissonance and angular experimentation around them.

"Big Fish" is an oddly appealing mixture of serenity and restless exploration; in its heavier melodic and harmonic structure this number perhaps comes closest to a more readily recognizable Frisell blueprint. "Lullaby" is anything but; Hendrix-type guitar cries, repeated minimalist motifs fading in and out and bubbling sci-fi sounds combine in edgy abstraction.

On the inside cover Frisell is enjoying a good laugh; could Silent Comedy be Frisellian slapstick? Is it a metaphorical custard pie in the face of those who bemoan the country, folk and chamber pastoralism that has dominated Frisell's recorded output for the guts of the last two decades, yearning instead for a return to the guitarist's more freewheeling electric days? What's certain is that in the context of Frisell's body of work, Silent Comedy is as striking an anomaly as Zero Tolerance for Silence (Umvd/Ryko, 1994) was at the time in guitarist Pat Metheny's discography. It'll be interesting to see if Silent Comedy marks a shift towards greater experimentation in Frisell's future projects.

With producer John Zorn at the helm, Silent Comedy was always going to sound different to the lyrical music that has characterized the guitarist's collaborations with producer Lee Townsend. That the results are so radically different will no doubt be a source of both delight and frustration for Frisell fans. But this music should have much broader appeal, particularly for those interested in improvisation and sound manipulation.

It's highly unlikely that Frisell is having a laugh at anybody's expense with Silent Comedy; far more likely is the scenario that he simply had a lot of fun playing as a one-man orchestra with license to roam.