BY GLENN ASTARITA
December 31, 2012
Sign in to view read count 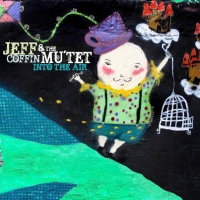 It's albums like Into the Air that accentuate the refreshing aggregation of ideologies and styles of Nashville, TN., where disparate genres align into nicely flavored outputs. Indeed, Coffin's sixth album leading the Mu'Tet, is a colorific offering that integrates funk, soul, and ballsy blues with electro-organic jazz phrasings, jazz-fusion and other cohesively interwoven stylizations.

Bassist Felix Pastorius once again demonstrates a genetic extraction of sorts from his father Jaco, and sets the table for a new wave of bass execution. He proudly carries the torch and provides the bonding agent for this band. With legendary drummer Jeff Sipe, the ensemble supports Coffin's soulful lines and melodic hooks that are interspersed throughout the beefy or silky grooves. Other than the respective musicians' enviable technical gifts, Coffin and his cohorts should be commended for the diverse set—often awash with harmonically appealing compositions. He also uses an electronic sax during select movements, where he inserts slithery, note-bending passages, while adding another dimension to the program's makeup.

"Lucky 13" is a standout track via Pastorius' chomping bass parts with Coffins sleek sax and Kofi Burbridge's radiant organ vibe. Marked by a catchy hook, the ensemble fuses a slightly ominous plot with a jamming bridge, abetted by guitarist Lionel Loueke's funked-out wah-wah choruses. In other regions of sound and scope, they fuel simmering in-the-pocket pulses and translucently align a radio-friendly party atmosphere with serious chops and thorny time signatures.